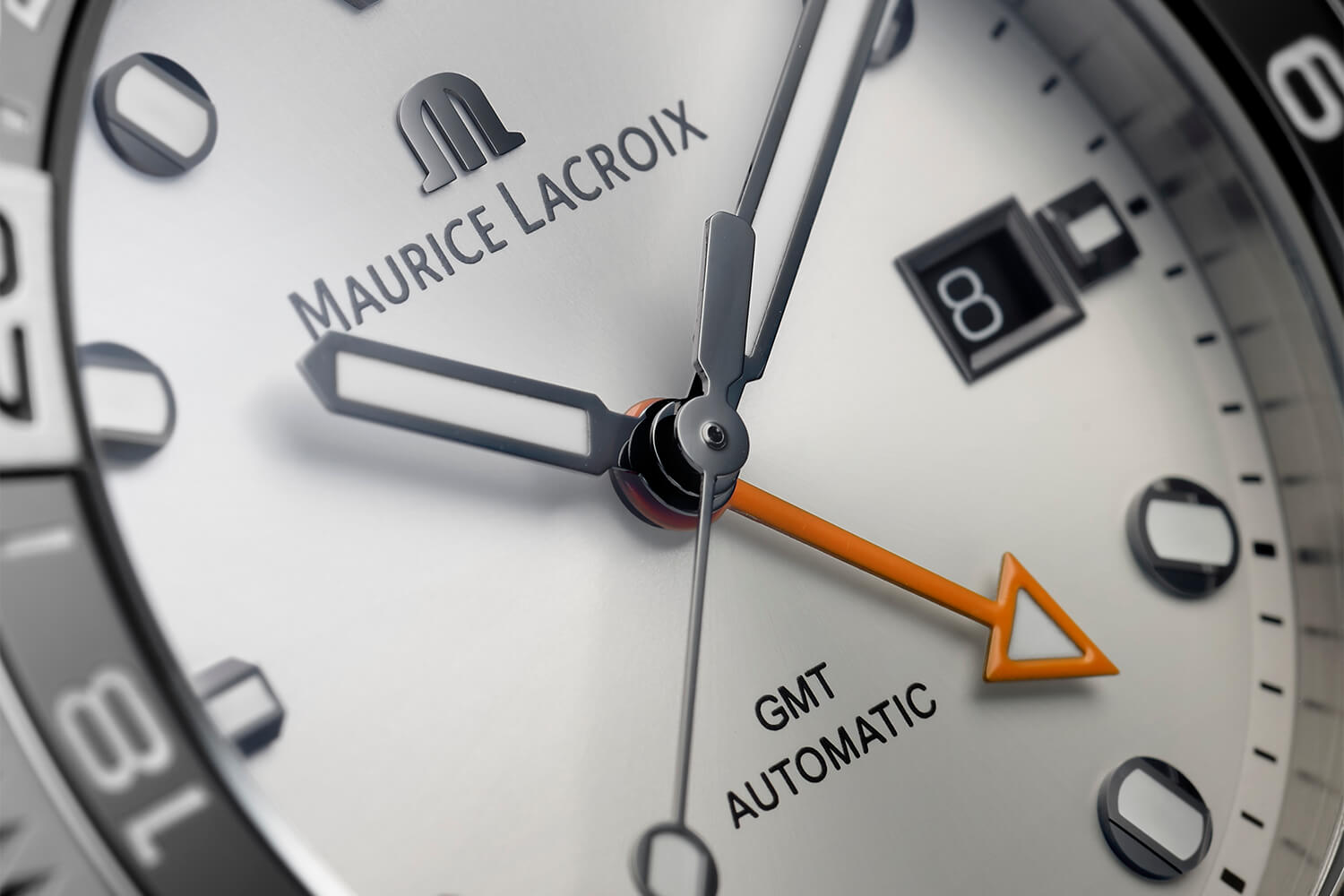 Aikon Venturer GMT is in Two Cities at the Same Time

Maurice Lacroix
With the newest extension of the Aikon range, the Aikon Venturer continues its exploration of urban worlds with the addition of a dual time zone. Available with a white or black dial, the AIKON Venturer GMT features a fourth 24-hour GMT hand. This new function makes it the watch of a lifetime... with two different cities at the same time.

For the first time in the Aikon family’s diverse range, Maurice Lacroix integrates the GMT function. What could be more logical for Venturers than to keep track of time in two cities, a watch made to explore and conquer them. With its radically modern look, this adventure-chic 43 mm diameter watch travels from metropolis to metropolis. Loyal to Maurice Lacroix’s mission, the watch displays a relationship between its objective and perceived value and its particularly favourable price. Thanks to the Easychange system, the Aikon Venturer GMT changes strap like it changes continent: naturally and stylishly, in the blink of an eye. 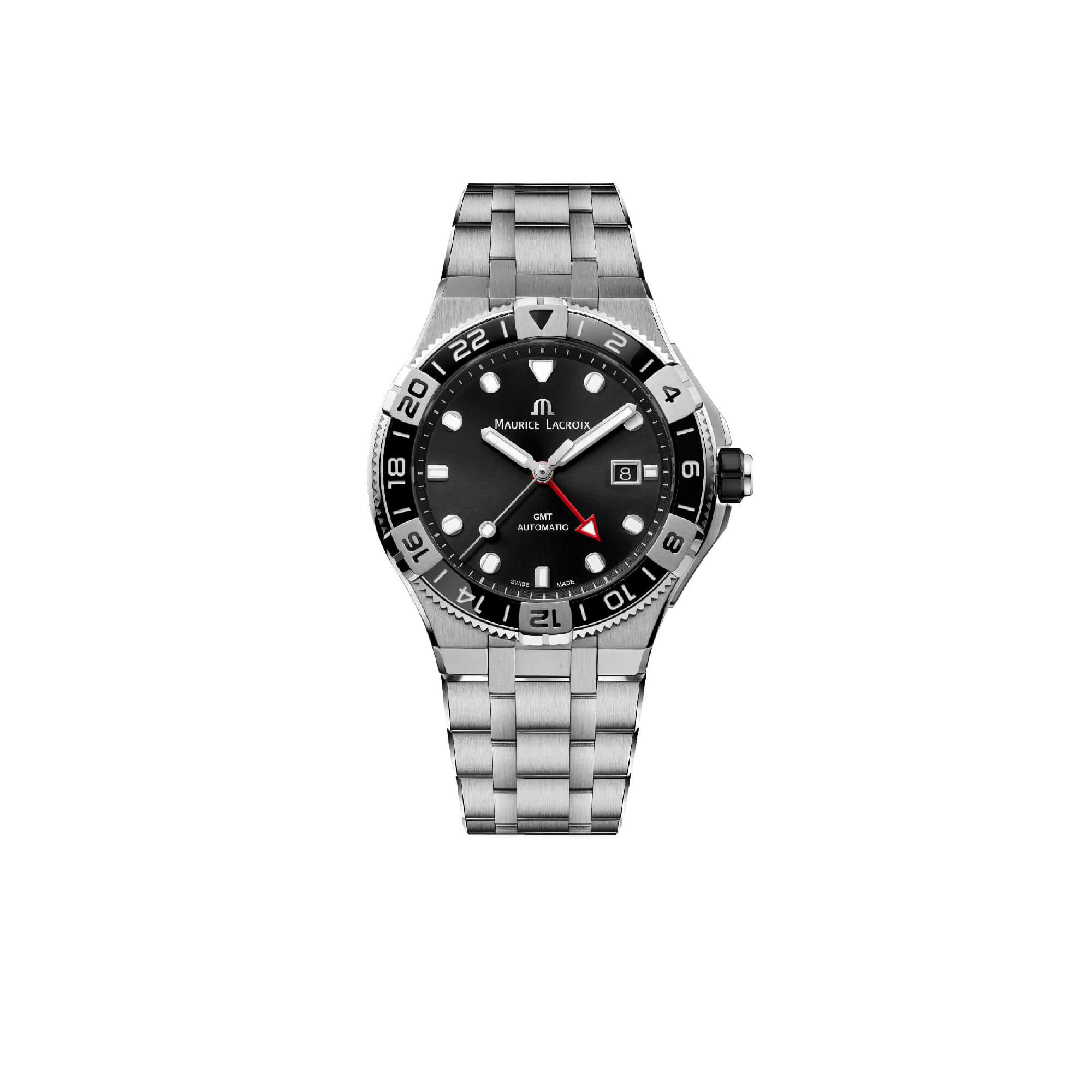 The Aikon Venturer is descended from the Maurice Lacroix Calypso, which included a diver’ s version at the time. This steel watch was one of the brand’ s iconic models in the 1990s and bore the same design codes that live on in the Aikon Venturer.

The integrated and water-resistant case, the six-arm bezel surrounding a flat sapphire crystal and the strap marked with an applied M logo made this model with its exceptional presence the brand’ s most iconic product. In 2016, Maurice Lacroix produced a contemporary reinterpretation of this iconic piece with the quartz Aikon. In 2018, an entire collection of Aikon Automatic pieces continued the saga and was topped off in 2019 with a new branch of the Aikon generation. Sportier, urban and even more adventurous, the Aikon Venturer is designed to face up to the pressures of today’ s urban life.

Its function sectors, level of detail and the energy emanating from the piece directly signal the connection to the Aikon`s aesthetic codes.

Venturer GMT: Robust but not massive

It is the ability to change that marks out the power of a design. Powerful but not brutal, robust but not massive, modern but not futuristic, this watch features three hands as well as a second time zone and date at 3 o’clock. Its function sectors, level of detail and the energy emanating from the piece directly signal the connection to the Aikon`s aesthetic codes.

Crafted entirely from steel, the surfaces of Venturer GMT are satin-finished, while its edges are polished. As the devil is in the detail, the case back is engraved with a world map, surrounded by the 24 main time zones, a useful and practical information base for use. Finally, its integrated five-link steel strap is fitted with the Easychange system, which makes it easy to remove and replace. The Aikon Venturer GMT also offers another style thanks to the second strap in a grooved rubber version. 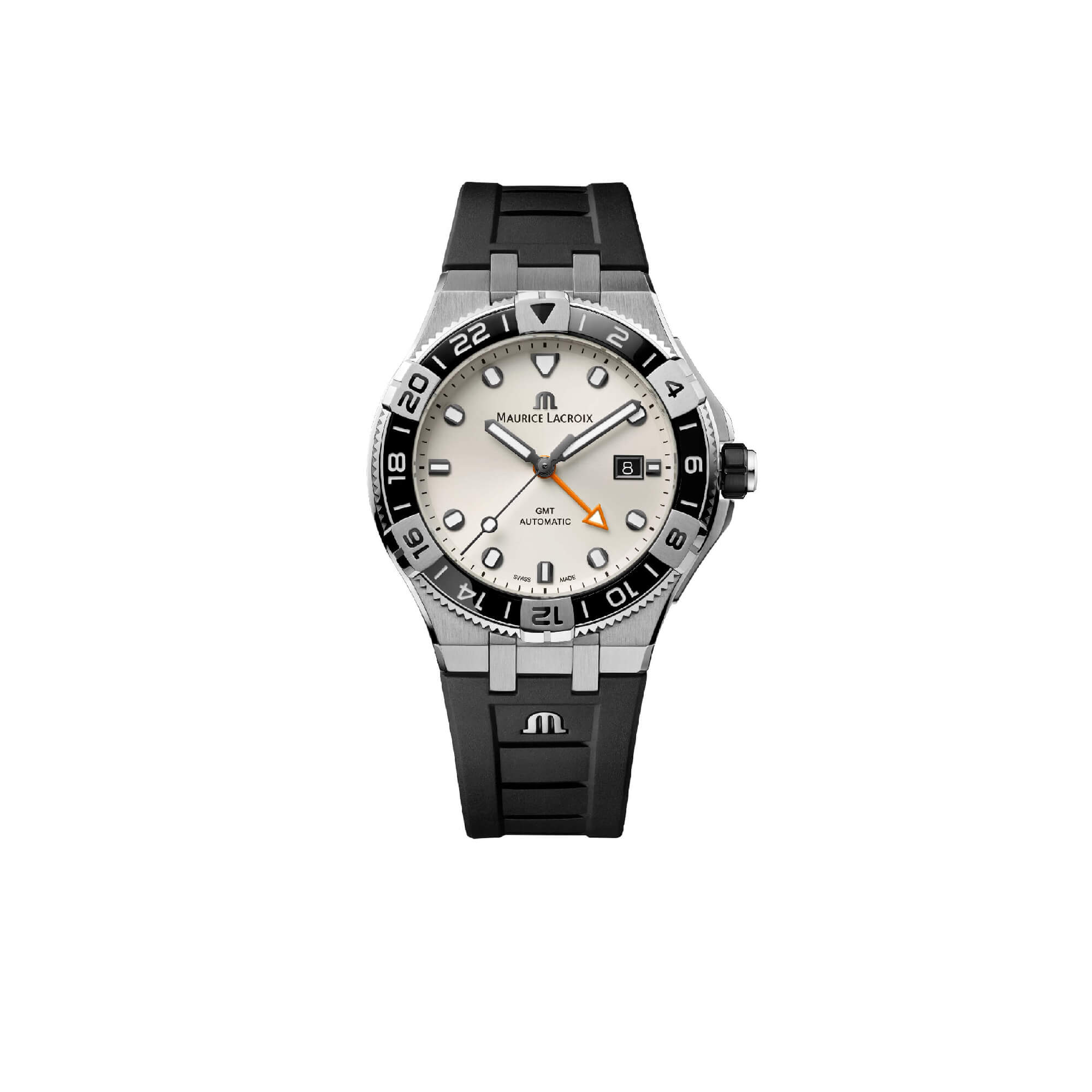 The most significant change on this new version is the Aikon Venturer GMT’s bezel. Its six arms – a powerful, characteristic Aikon feature – already performed a functional role with the Venturer.

Characterized by its Reliability and Robustness

The function of the Aikon Venturer GMT’s dual time zone is based on Maurice Lacroix’s watchmaking know-how. The ML 165 automatic chronograph calibre with date, hours, 24-hour second time zone, minutes and seconds in the centre is characterised by its reliability and robustness, essential to the adventurous spirit of this piece, which is water-resistant to 300 metres. To increase contrast and legibility, the GMT hand stands out against these two dials offered by Maurice Lacroix. 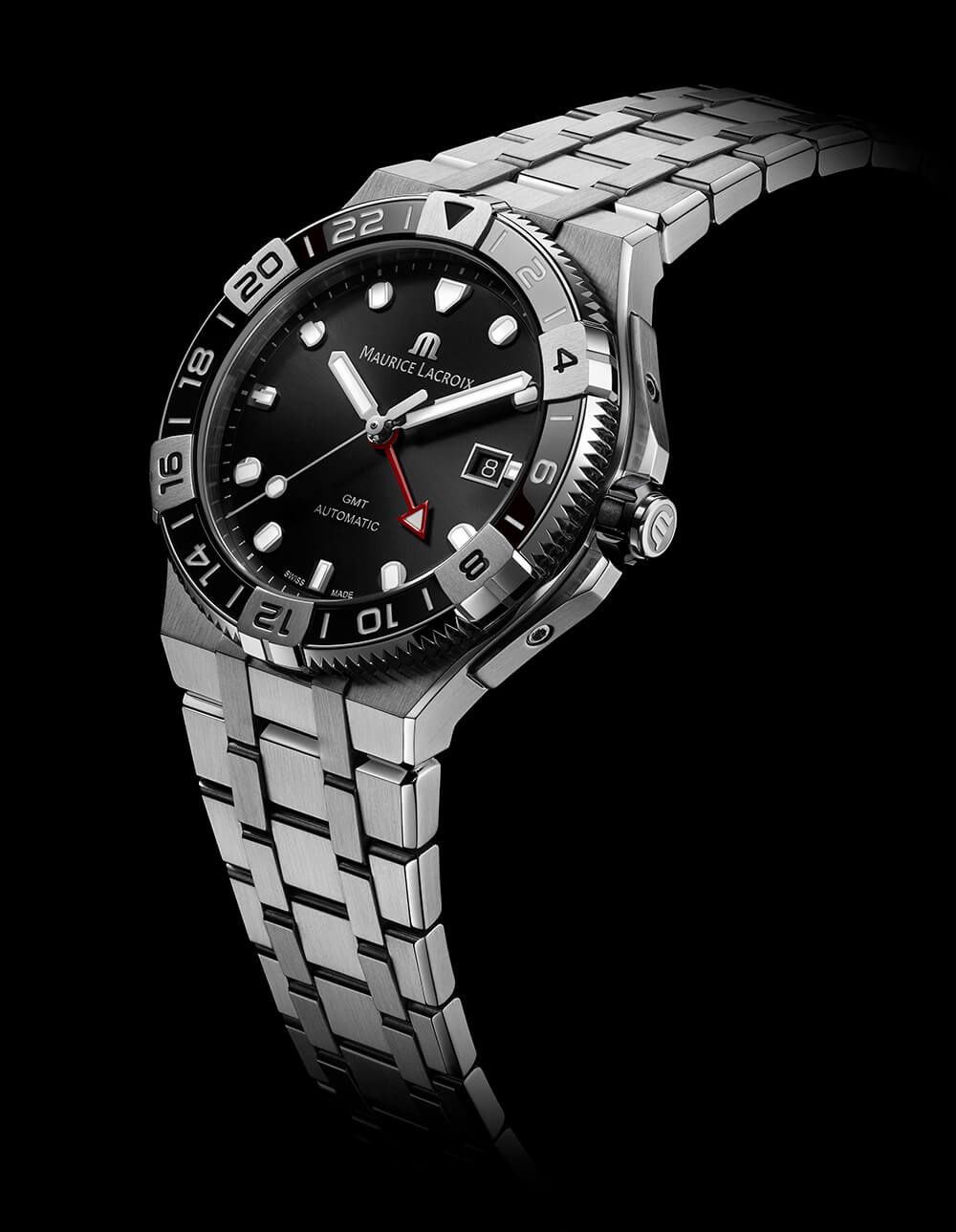 But the most significant change on this new version is the Aikon Venturer GMT’s bezel. Its six arms – a powerful, characteristic Aikon feature – already performed a functional role with the Venturer. In fact, they extended beyond the ceramic bezel, a technical and scratch-proof material, so that it could be easily grasped and rotated in one direction. Now, the unidirectional bezel is calibrated over 24 hours to accompany the fourth hand on the dial, which turns once a day. 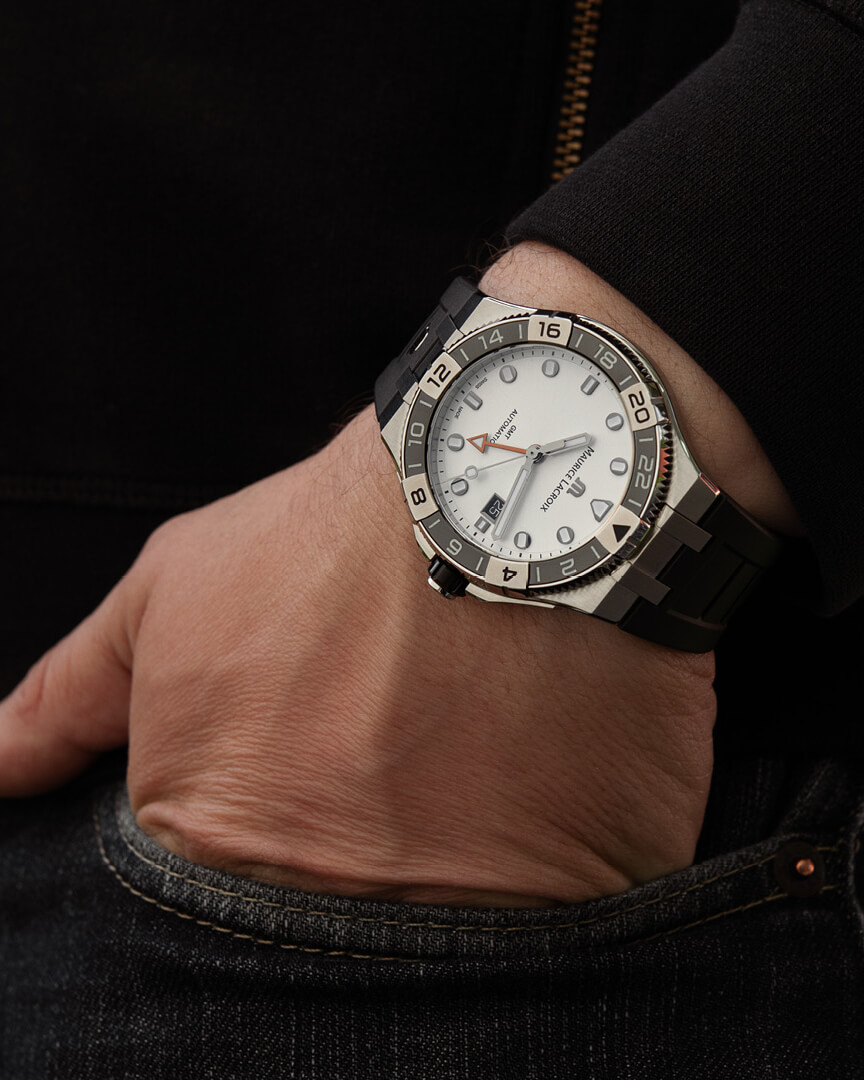 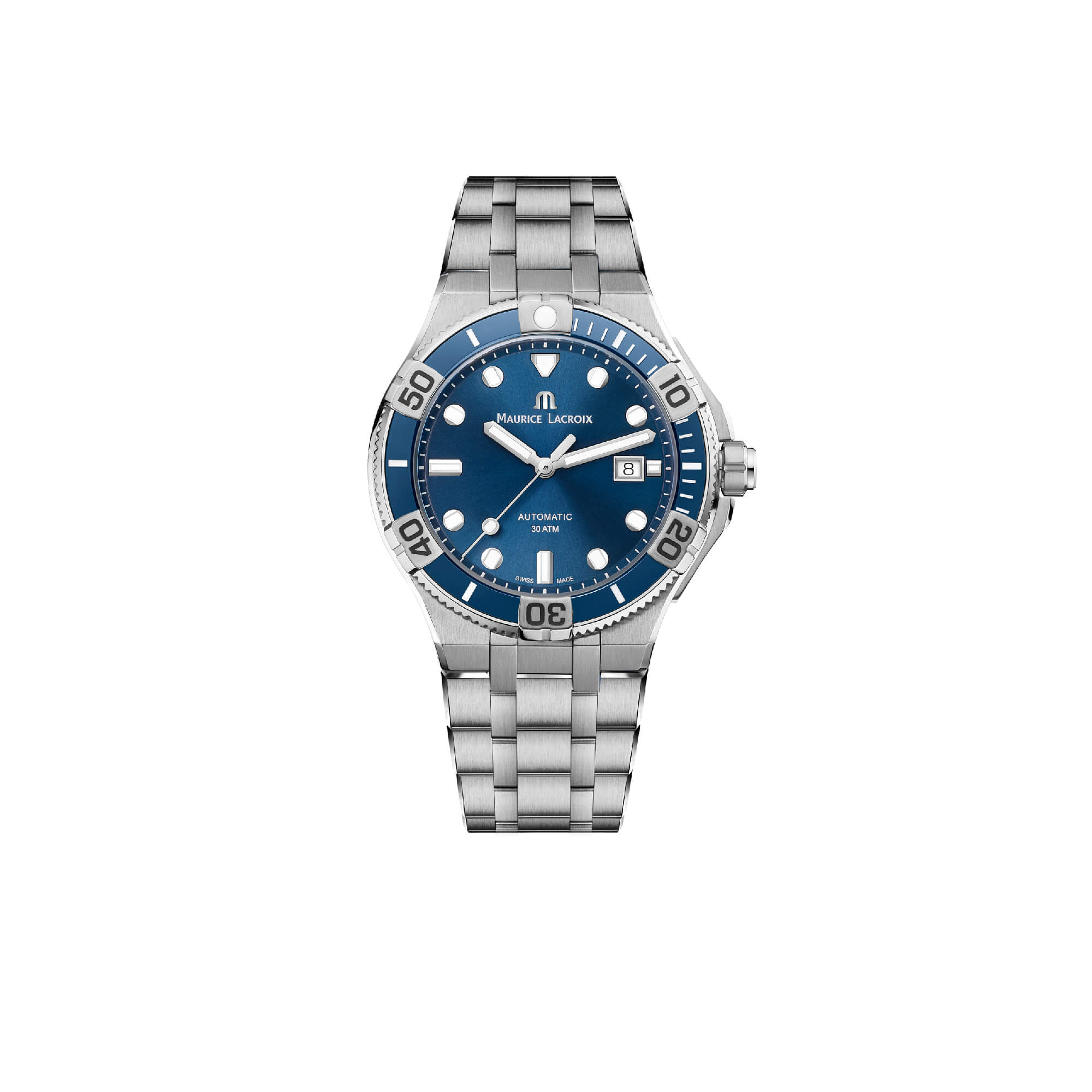 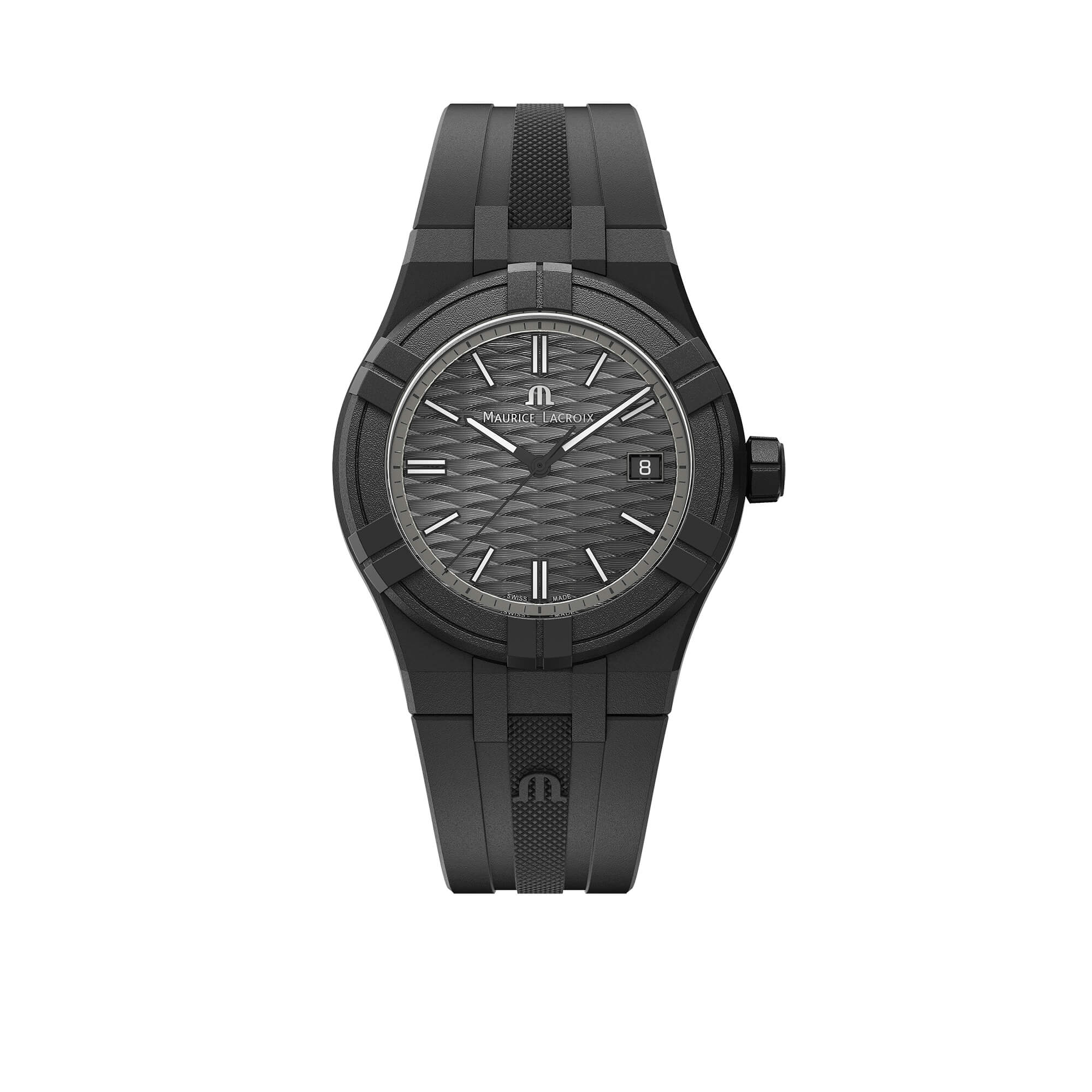 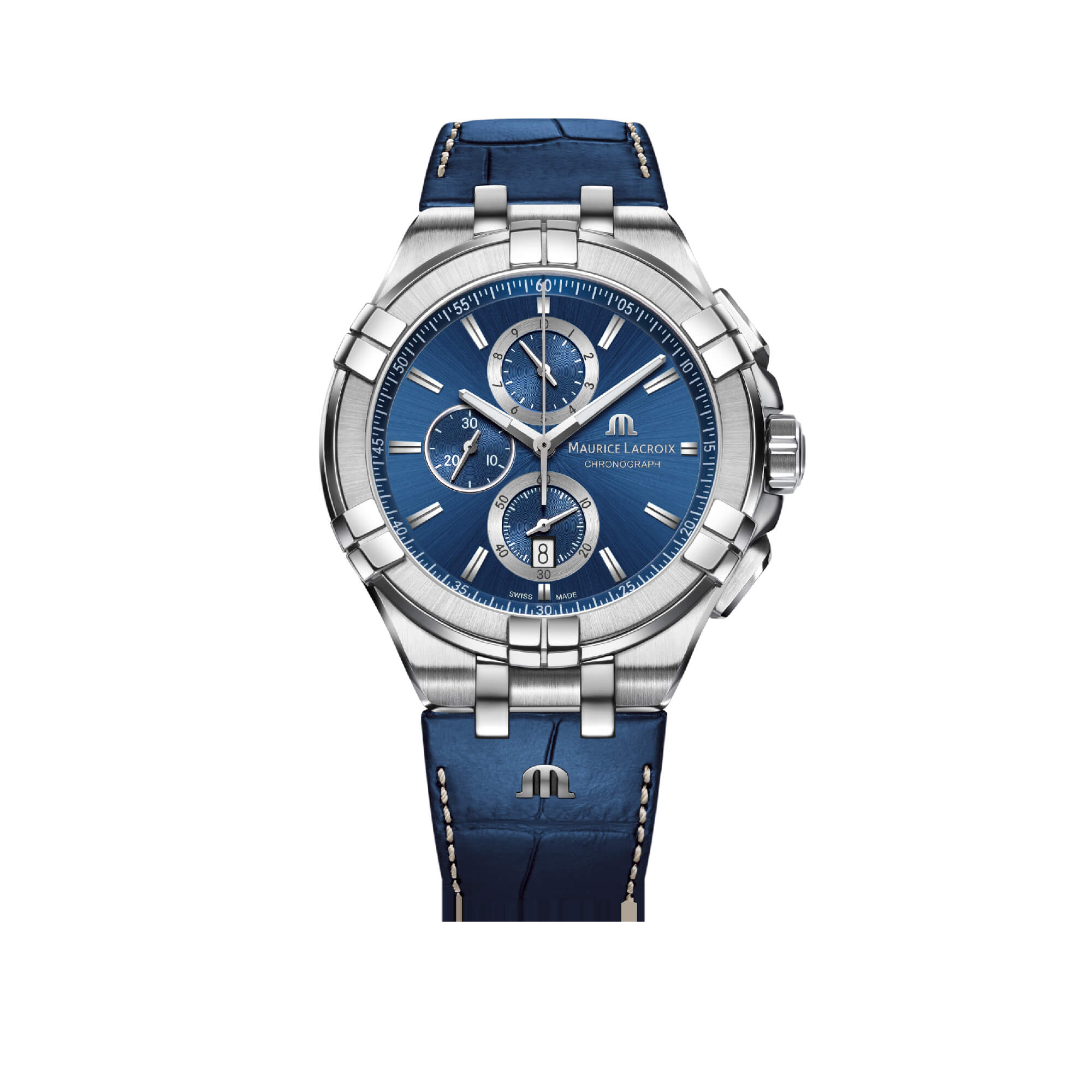 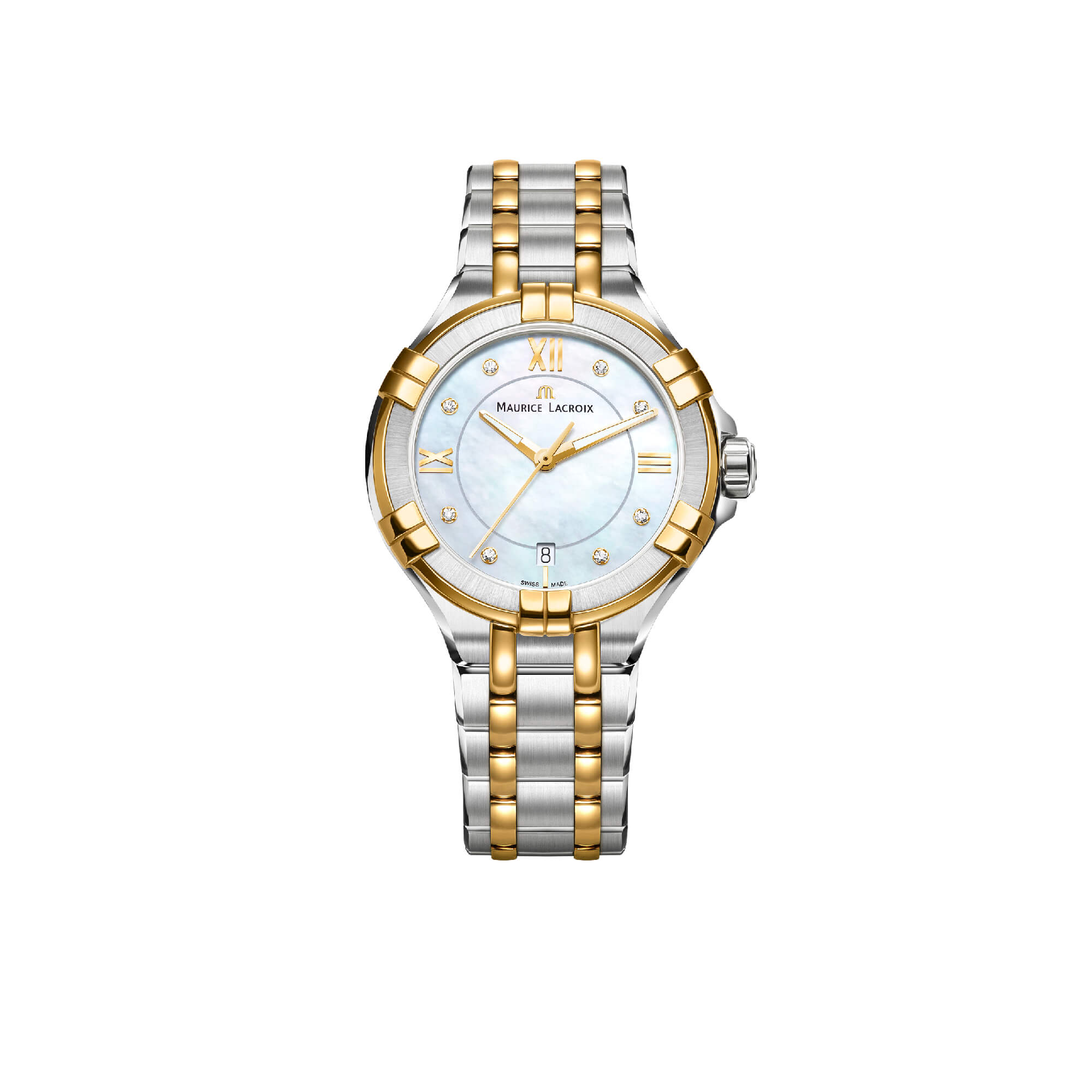 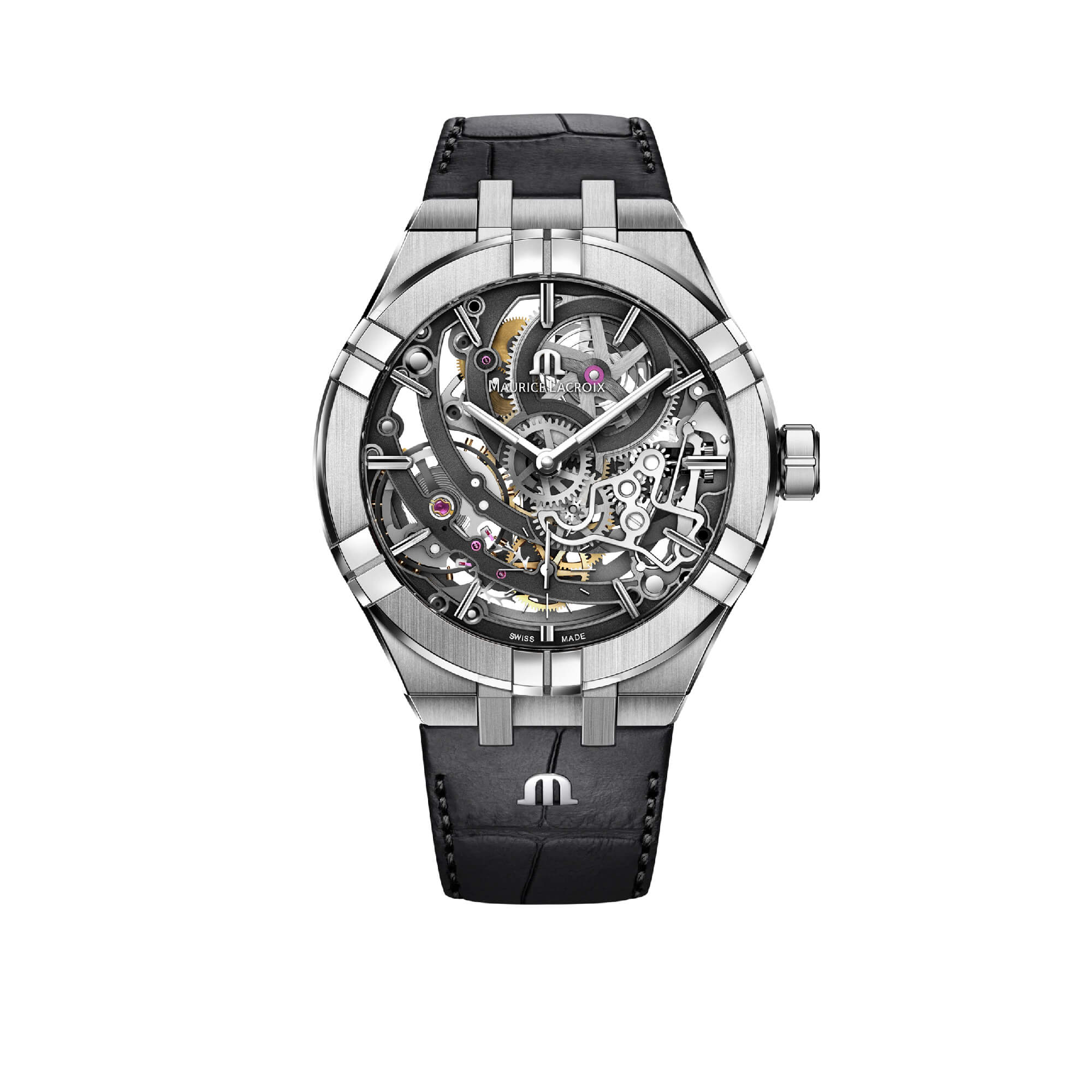 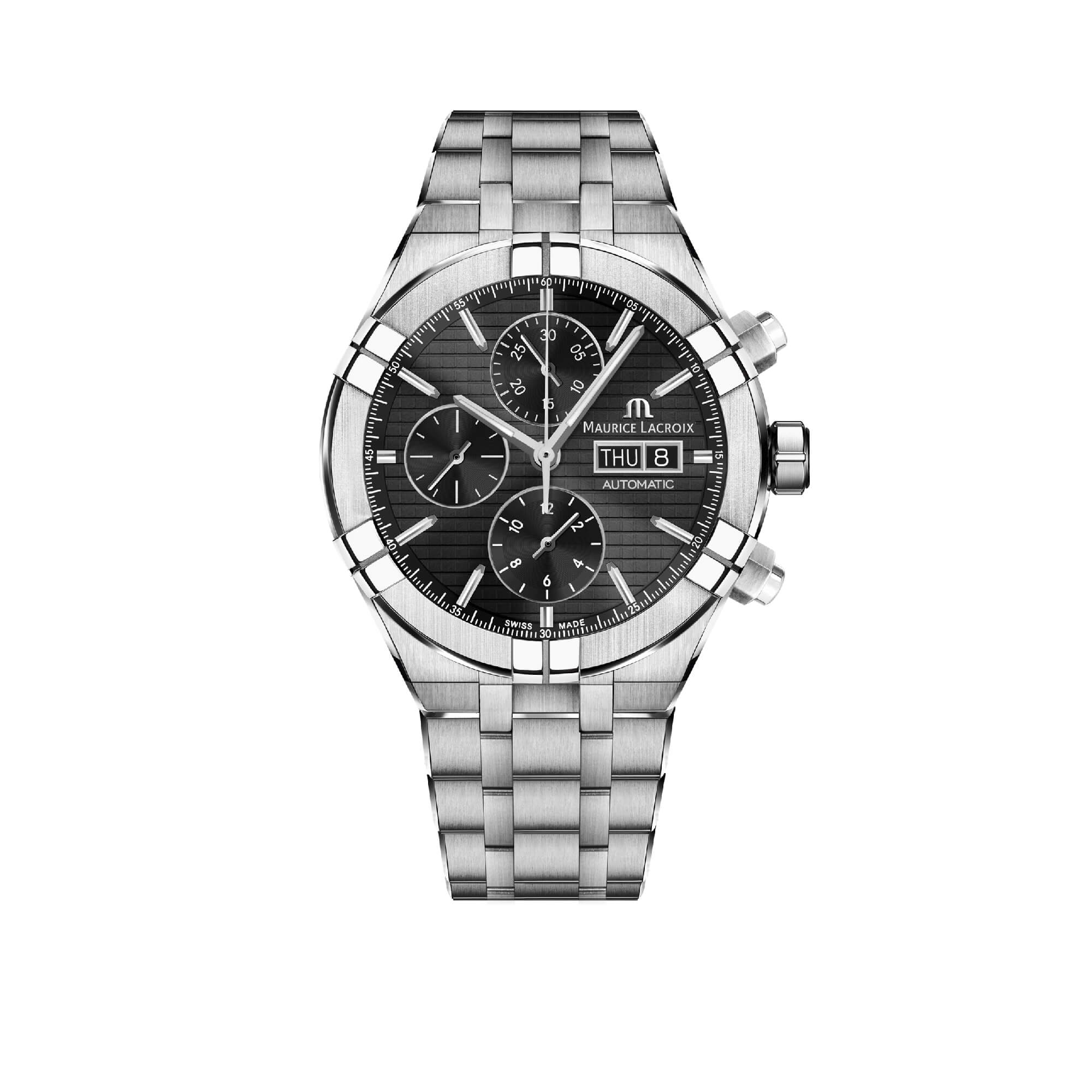 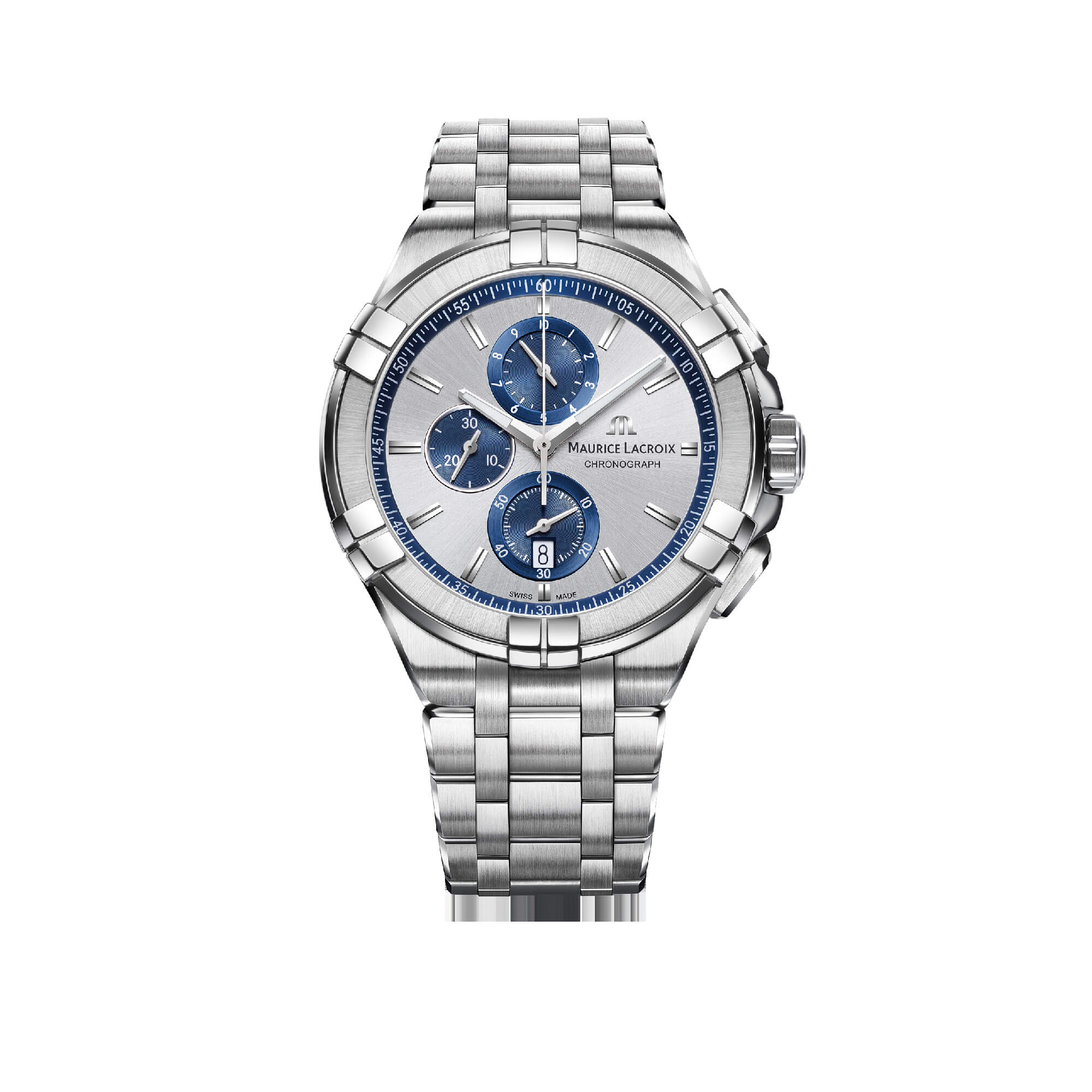 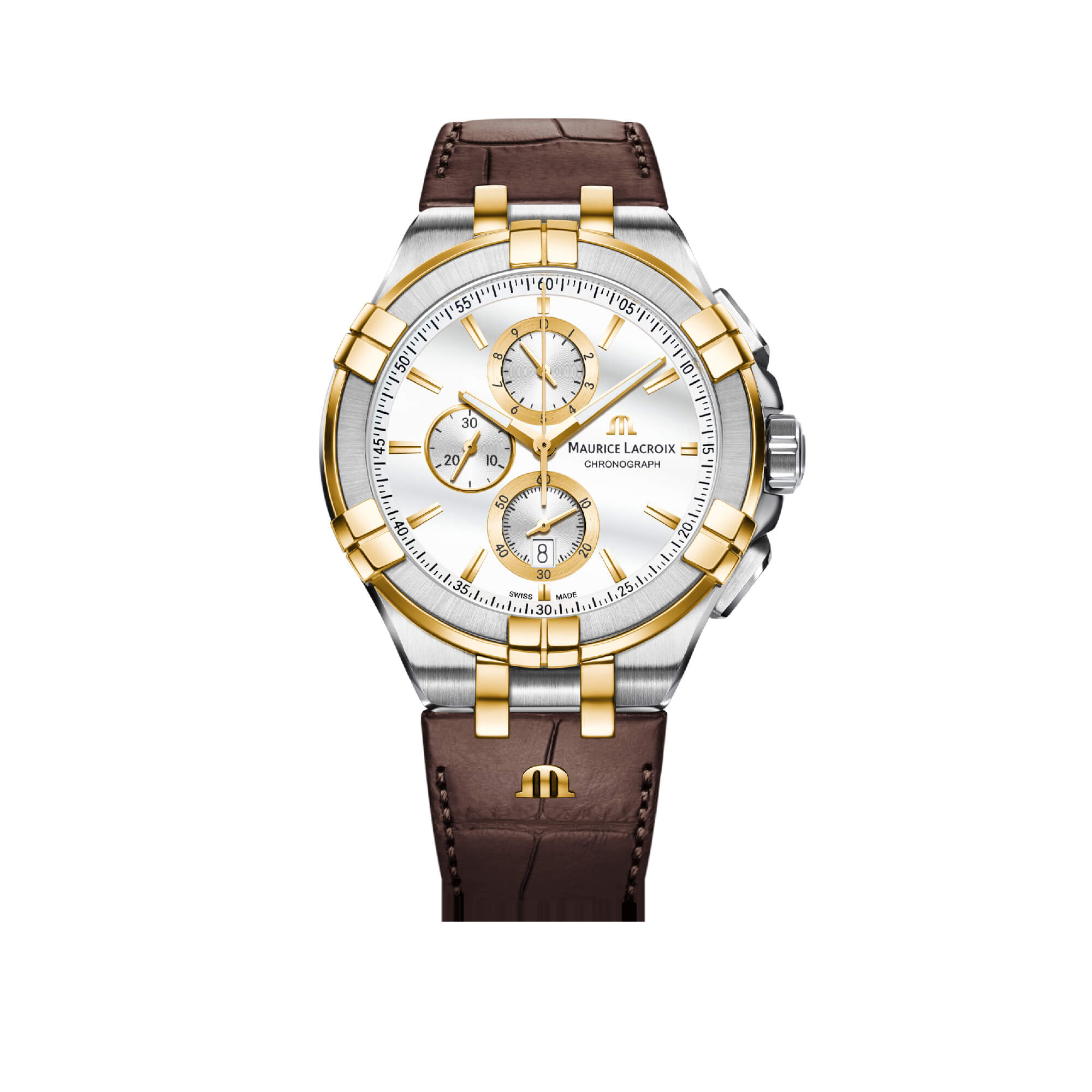