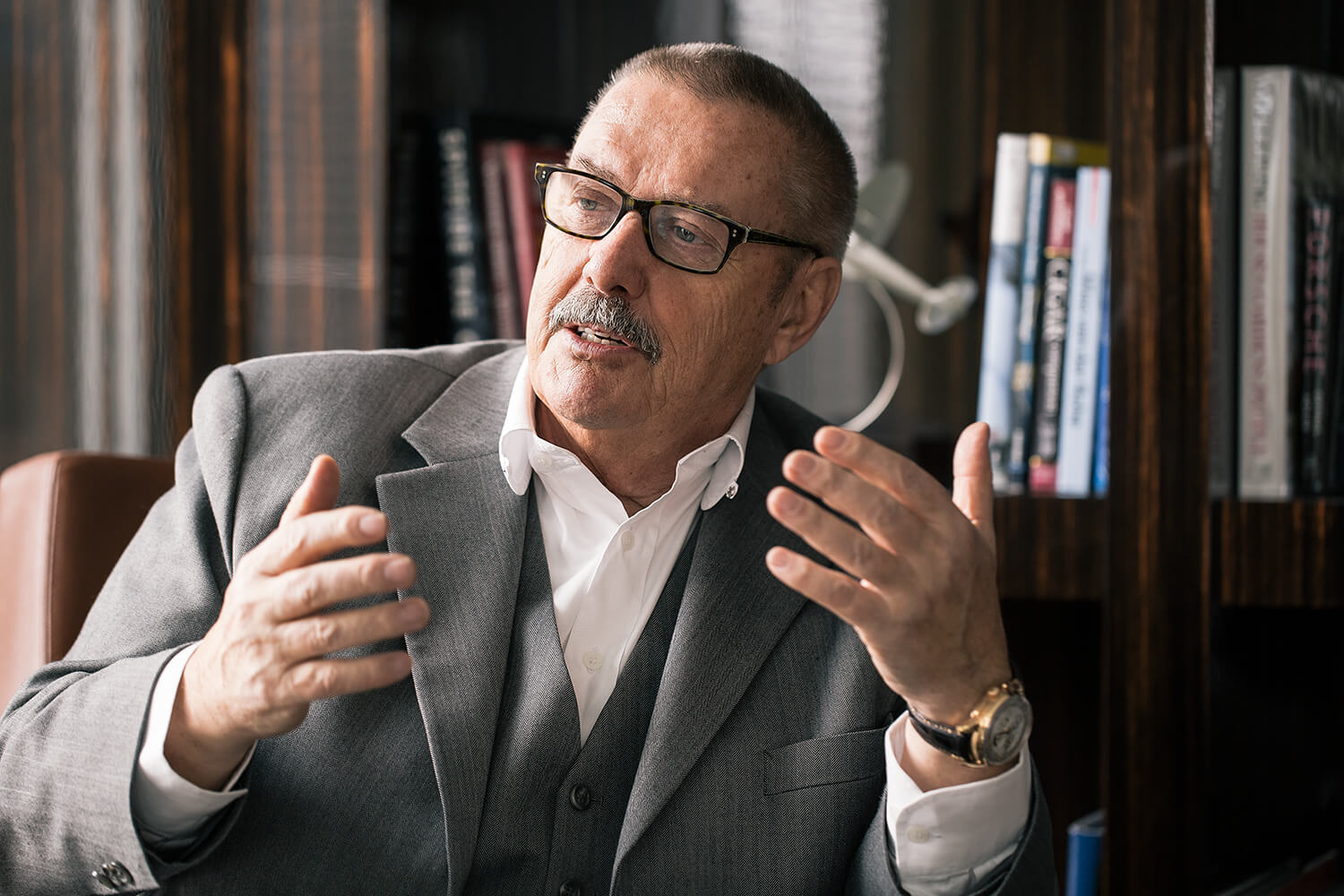 “I wanted to stay for two years at the most”

Tjaša Malalan
Nejc Puš
At the IWC headquarters, a nice gentleman received us with a slightly unusual welcome: “Which language do you wish the interview to be done in? English, German, Italian, French, maybe?” Hannes Pantli is one of those people whom we could talk to for days, and we still wouldn’t manage to write down all of the exceptional stories that he has experienced as the head of sales for first European and then global market at the world renowned wristwatch maker – IWC.
We sat down to talk to him about the history of IWC, collecting and wristwatches.

T: You’ve been collaborating with IWC for more than 40 years and in this time, you’ve been through good and bad times. What is the background of this interesting story?

H: Before, I was working in Geneva as a commodity broker, but I didn’t want to stay in that business for more than 5 years. I wanted to return to the German-speaking area. In 1972, I got a job offer from IWC through a headhunter, to take over the position of head of sales for Europe.

I said to myself again that I wanted to stay for two years at the most in such a small place. Then, two years later, the quartz crisis started and things got really interesting. So interesting that I forgot about time; the company that was practically bankrupt needed saving.

T: Because cheap quartz mechanisms appeared in the market? How did it happen and what was your strategy to deal with the given situation?

H: It’s called a quartz crisis, but it was not only quartz. The Bretton-Woods treaty had controlled the exchange rate between European currencies and the US dollar for over 30 years. During that time, the gold price was also fixed – it was about 4800 Francs per kilo. Well, in the time of the “quartz crisis”, due to the loose exchange rates and gold price, in about six months, our gold timepieces tripled their price and you can imagine how the demand dropped.

There was a need for new markets, so we went to Middle East: back then, I was in Dubai, Abu Dhabi, Oman several times a year; at that time, these were the places almost nobody had heard about. We made five to six new collections every year, and I sold them to the sheiks directly, with no middlemen.

For over 20 years, IWC was the only watch company that trained young watchmakers in Switzerland.

T: You extended your sales to a new market, and at that time, you managed to attract an investor, but quartz mechanisms were still invading the market which was up until then familiar only with mechanical timers.

H: The whole of Switzerland gave up on the watch industry! While we were searching for an investor, we spoke to 17 Swiss companies without success, and we were always turned down the same way: they believed that the traditional watch business was finished. Finally, VDO group invested in us; they tried to build a big watchmaking group, and within the company, we figured out that we could never compete with the electronic companies.

We decided to continue producing exclusively mechanical timepieces, which is very important and I’m personally very proud of it. For over 20 years, IWC was the only watch company that trained young watchmakers in Switzerland. All the big names have given up, and they didn’t train watchmakers anymore. They were sure the future would be completely electronic.

T: The traditional watchmaking survived, but the situation it similar today. The so-called smart watches are entering the market and the companies are responding in different ways: even in the prestigious segment, we can already find “connectable” timepieces. What is your opinion in regard to this?

H: I believe that these smartwatches are practically only smart phones on a strap, nothing else. It has basically nothing to do with a wristwatch, while you only need 50 francs to learn the exact time: it is on phones, in cars, on TV sets, even on microwave ovens. You don’t need any watch just to know the time. This is about the emotions, tradition, the art of watchmaking. This is why people buy real watches.

I am convinced that timepieces in our price range and at our price level will remain on the market. Fortunately, and I have to say this, nothing is logical in the watchmaking trade - if it were, our companies would all be dead! Let’s take a look, say, at the collectors; our logic was excellently summed up not too long ago by my friend who is a hunter, when he said that he hoped that after his death, his wife won’t sell his guns at the low price that he told her he paid for them! Same goes for the watch collectors! 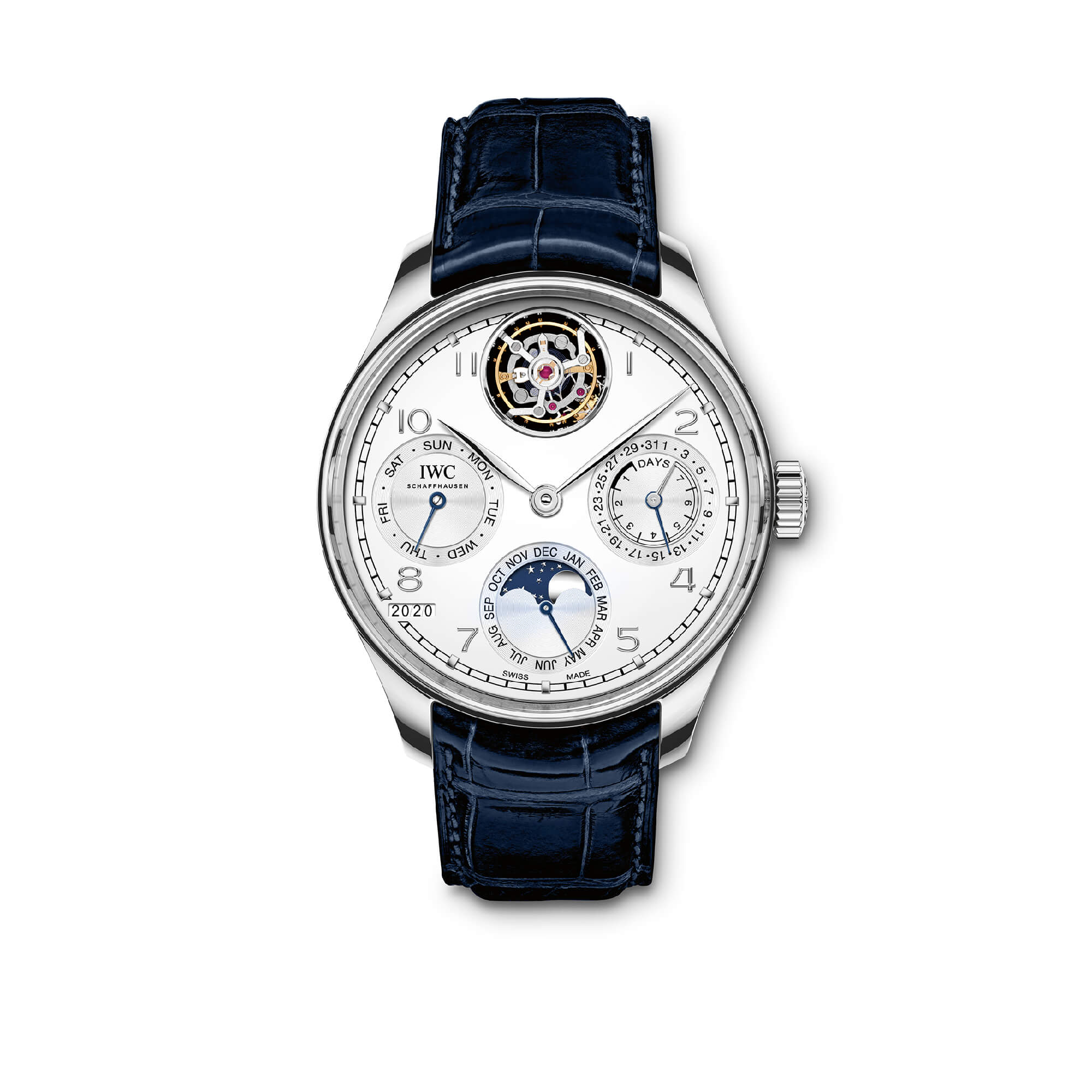 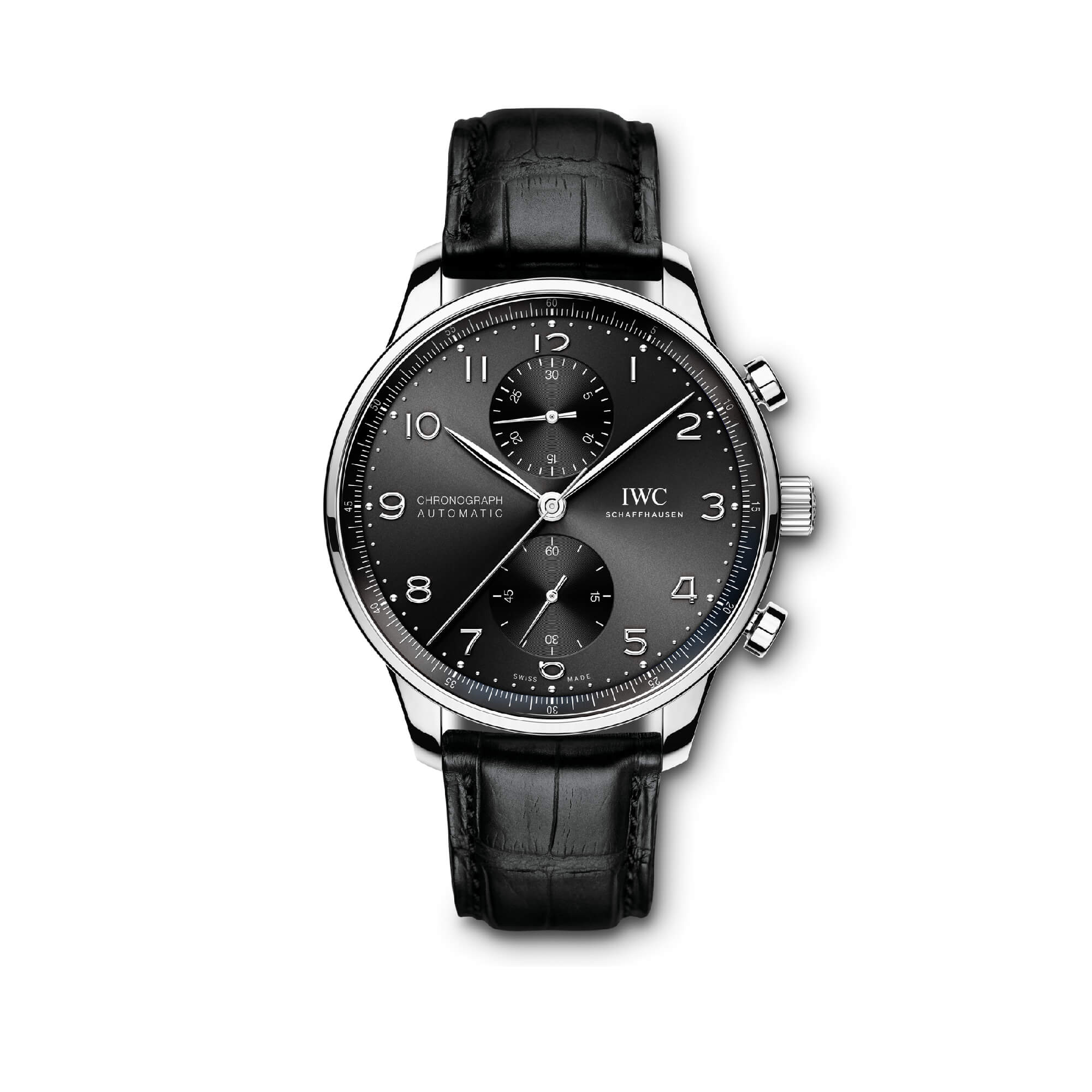 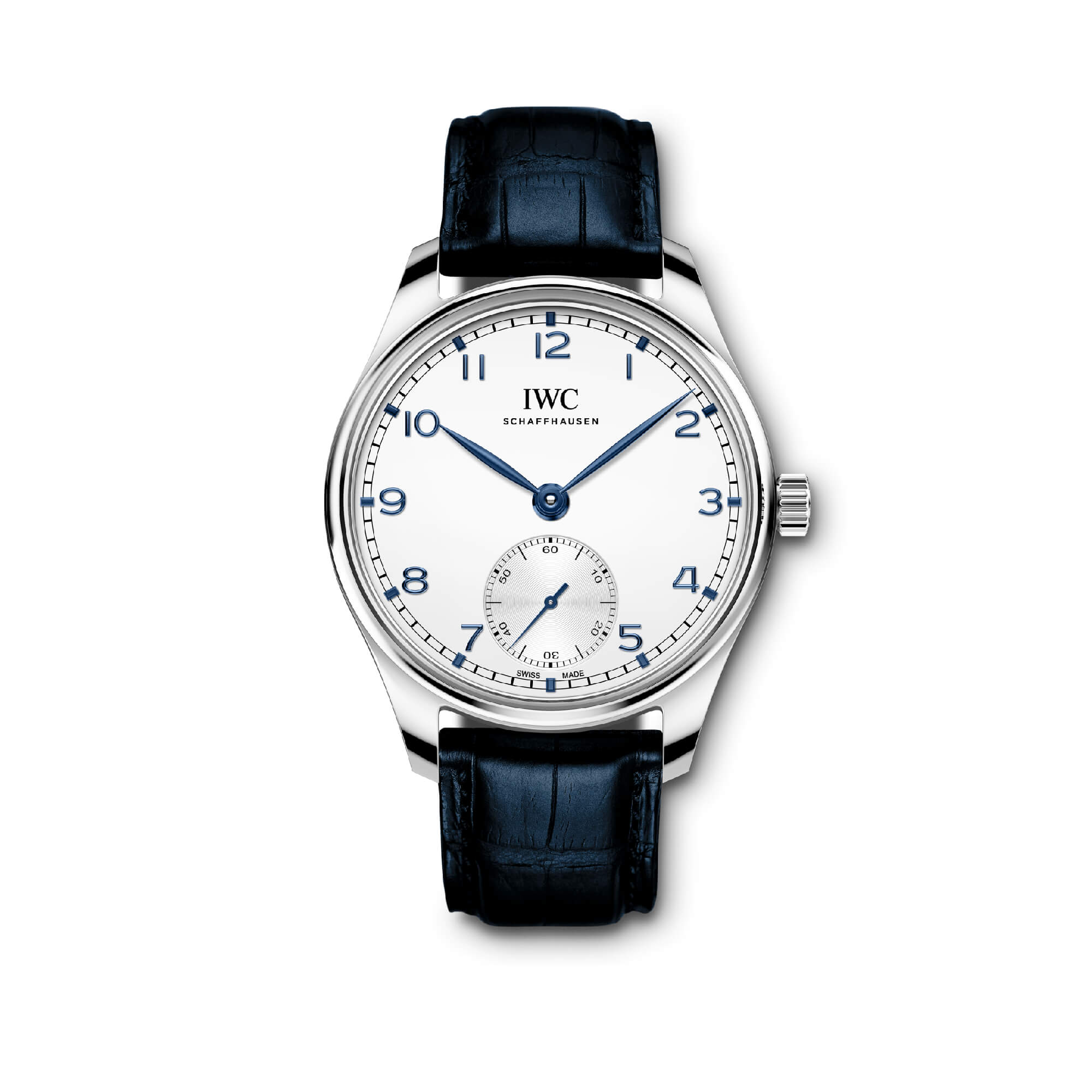 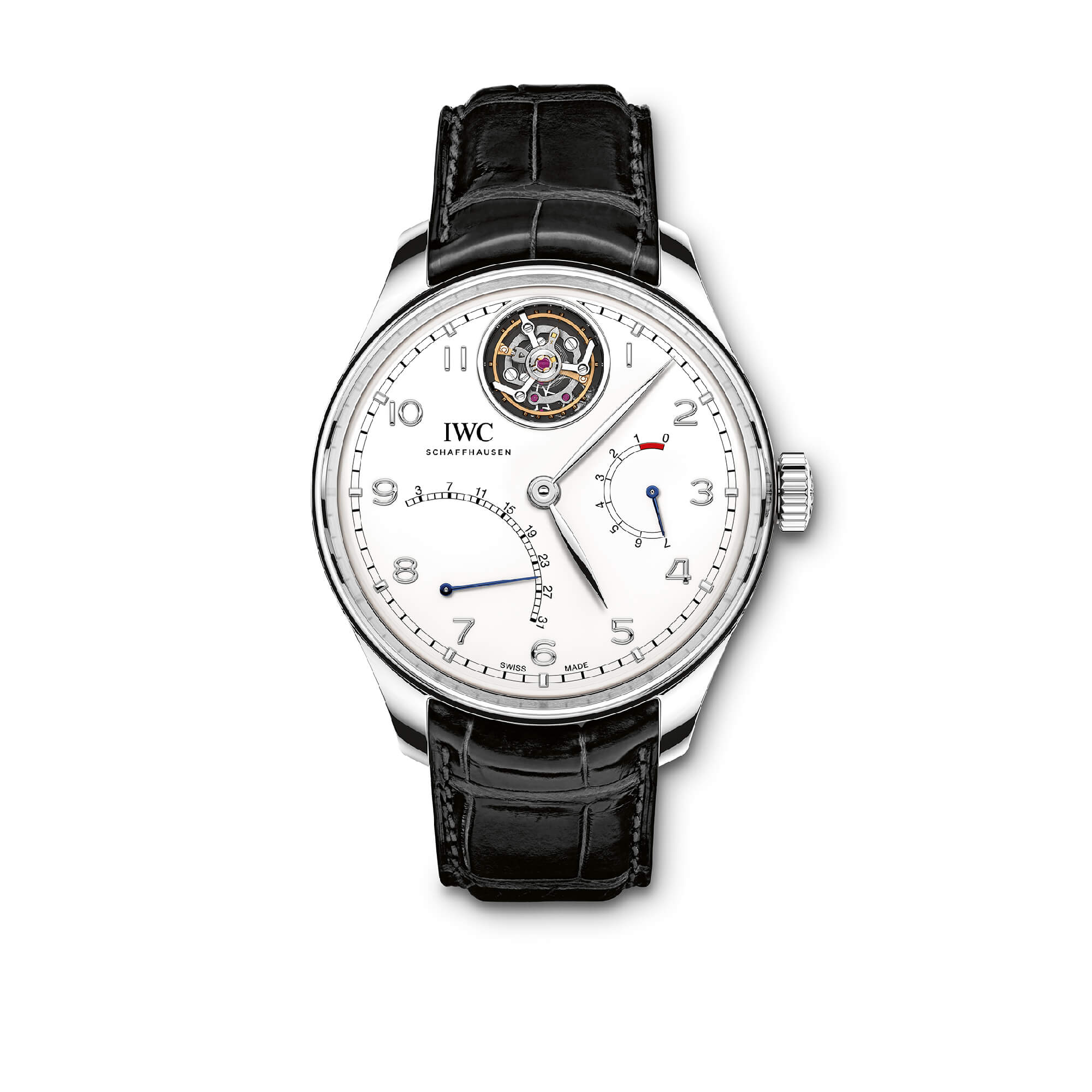 T: IWC always exceptionally appealed to collectors. What does this specialized audience look for in a watch today?

H: You’re asking difficult questions! I think there are two very, very different types of collectors. There are those that don’t deserve to be called collectors, who buy wristwatches as investments and see them as opportunities to make profit. This is a question I get from a lot of people – which watches could be bought as good investments; but I always tell them that buying a timepiece is like buying art: if you see a product you like, you simply buy it because you like it. Perhaps you’re lucky and the artist will one day become famous, but don’t buy art for speculation. Such people would do better if they went to a bank, but lately, even the banks are not very reliable.

We had a collector’s meeting in Hong Kong not long ago; it was an amazing experience. Some own every single Pilot’s watch that we have ever made, in every variation. Their collections have over a hundred pieces, sometimes even several pieces that are the same but in different conditions: one almost brand new, another other stained ... Amazing! But I still don’t think that they collect watches for investment. In my case, I have to say, collecting is interesting for me because I just, I have to admit, I like watches. I never bought any other timepiece than an IWC Schaffhausen.

You don’t need any watch just to know the time. This is about the emotions, tradition, the art of watchmaking. This is why people buy real watches.

T: You really never ever bought anything else?

H: Really! And my problem was, I never sold!

You know, in Switzerland, it’s traditional to receive a watch from your godfather at the confirmation in church. It’s typical. When I was at that age, me and my schoolmates all received watches of different big brands; all but for one boy. He got an IWC and nobody knew what it was. We were all asking him: “IWC Schaffhausen, what the heck did you get?!” He was very cool, he shut us down by saying that if we didn’t know what brand it was, that really wasn’t his problem. I don’t know why, but I never forgot that. When I was later offered a job at Schaffhausen, I simply had to go and see what it was about!

Well, due to my work and good connections I was able to buy very interesting pieces around the world. That includes many of those that are now kept in the IWC museum here in Schaffhausen. 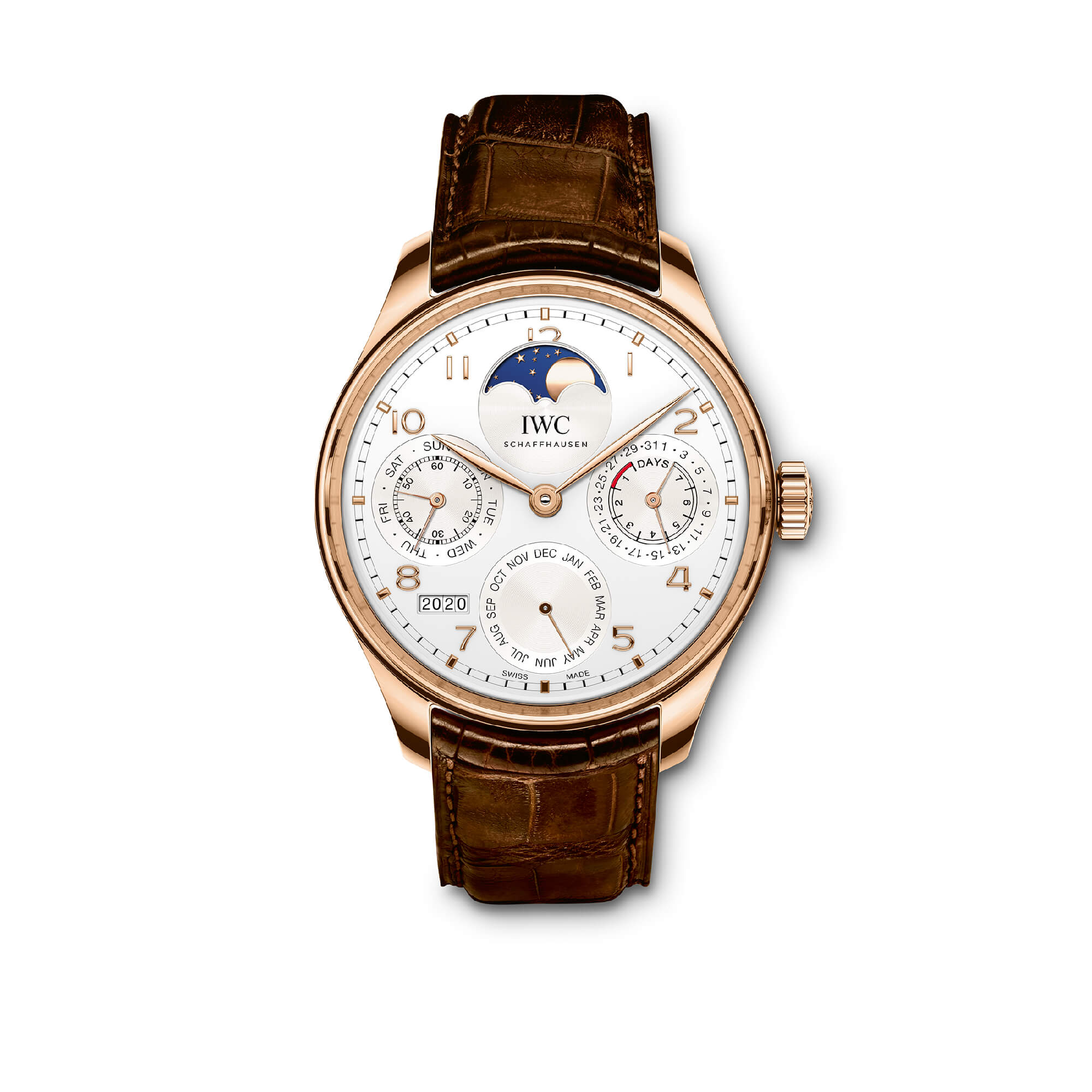 T: Those really rare timepieces are the ones that their owners have trouble parting from?

H: That is true. You reminded me of a story about a truly special pocket watch; only two pieces of the kind were made in 1884. It is called “La-Magique” and it is truly magic. One of the two was owned by a noble family in Sicily, and even today, no one knows where the other one is. The story of the purchase twisted for about two years: there were lawyers involved and no one knew who was its true owner, it was all very complicated ...

And then, one evening, and elderly gentleman called me from Sicily and he told me: “Look, I’m the real owner of the piece and I would like to sell it. Now seriously, how much would you pay? I’ll bring it to Schaffhausen.” And I of course bought it; we even had a delicious lunch together here in Schaffhausen.

T: I wanted to ask you where you were storing the collection of such exceptional timepieces, and then you mentioned the IWC museum. Can you tell me more about it?

H: We decided to make a museum at the 125th anniversary of IWC, but the factory owned no historic timepiece at that time, so they borrowed my private collection. Later, we were taken over by a new owner, Richemont company, who thought that the museum was also a part of the contract; they only found out later that the collection was privately owned.

Then they offered to buy it, and I decided to sell. I didn’t really know what my children would do with more than 300 watches. Still, I kept the really important pieces and I’m now only lending them to the museum. That was when I decided to stop collecting them, but look at me now - I again own more than a hundred pieces! I also decided to retire, but they invited me back and even today, I work on a smaller scale as an advisor and a member of the board of directors. 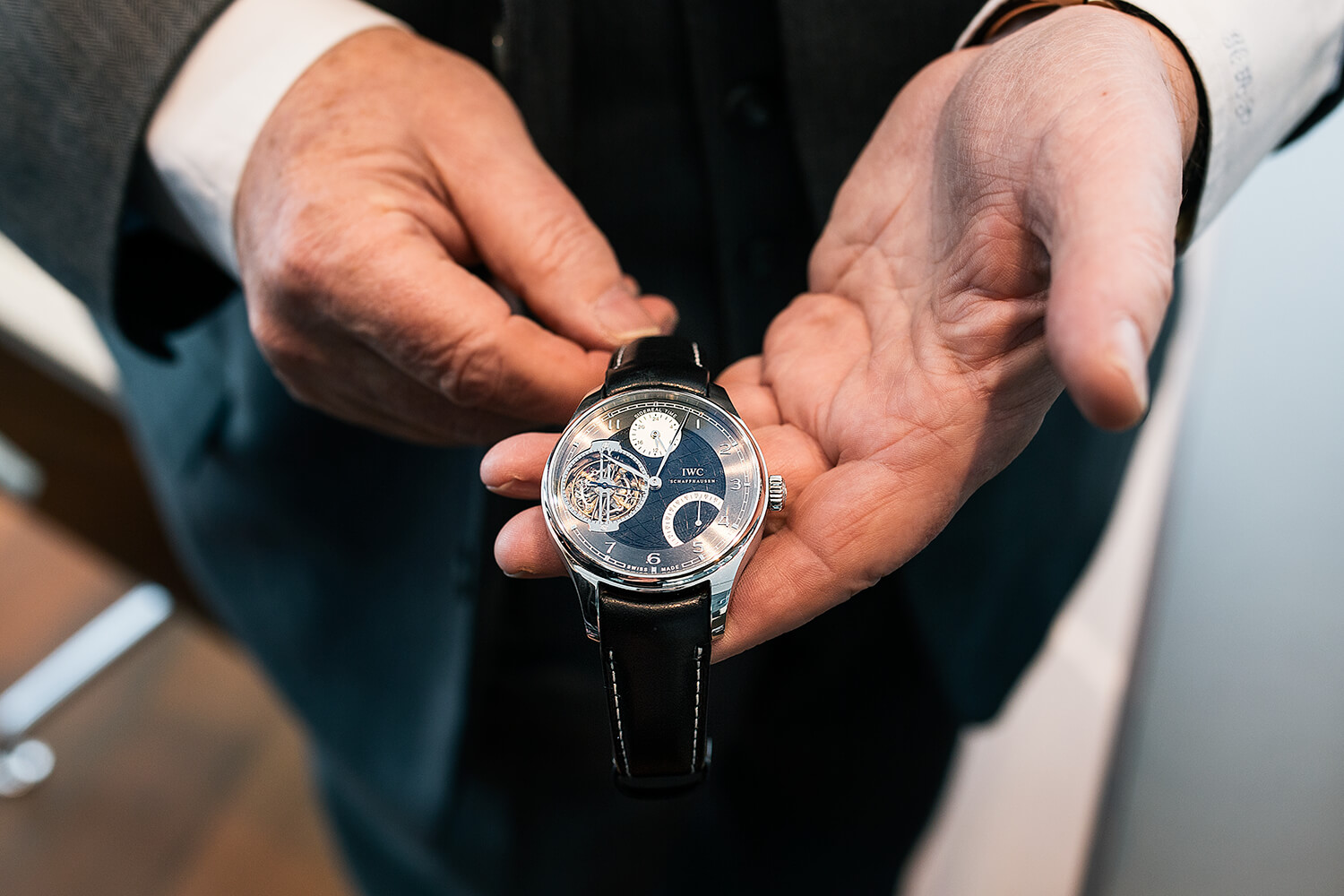 T: I must admit that it all seems to be almost unbelievable, and I simply have to ask what kind of career you would choose if today was again that year of 1972, when it all began?

H: I would choose my path with IWC again! To tell you the truth, after my studies, I didn’t know exactly what to do. I worked in Geneva, then I worked as a tour guide for a few years, because I like travelling a lot and I like to be with people.

I used to travel a lot with IWC, and I still do. I have wondered myself, if I didn’t end up being in watch business, what would I do? I don’t know, anything! Perhaps I would work in fashion, but succeeding in fashion is not easy if you’re a man. I still think that I would somehow end up working in car industry, working for some good brand of cars. That could eventually lead somewhere interesting. 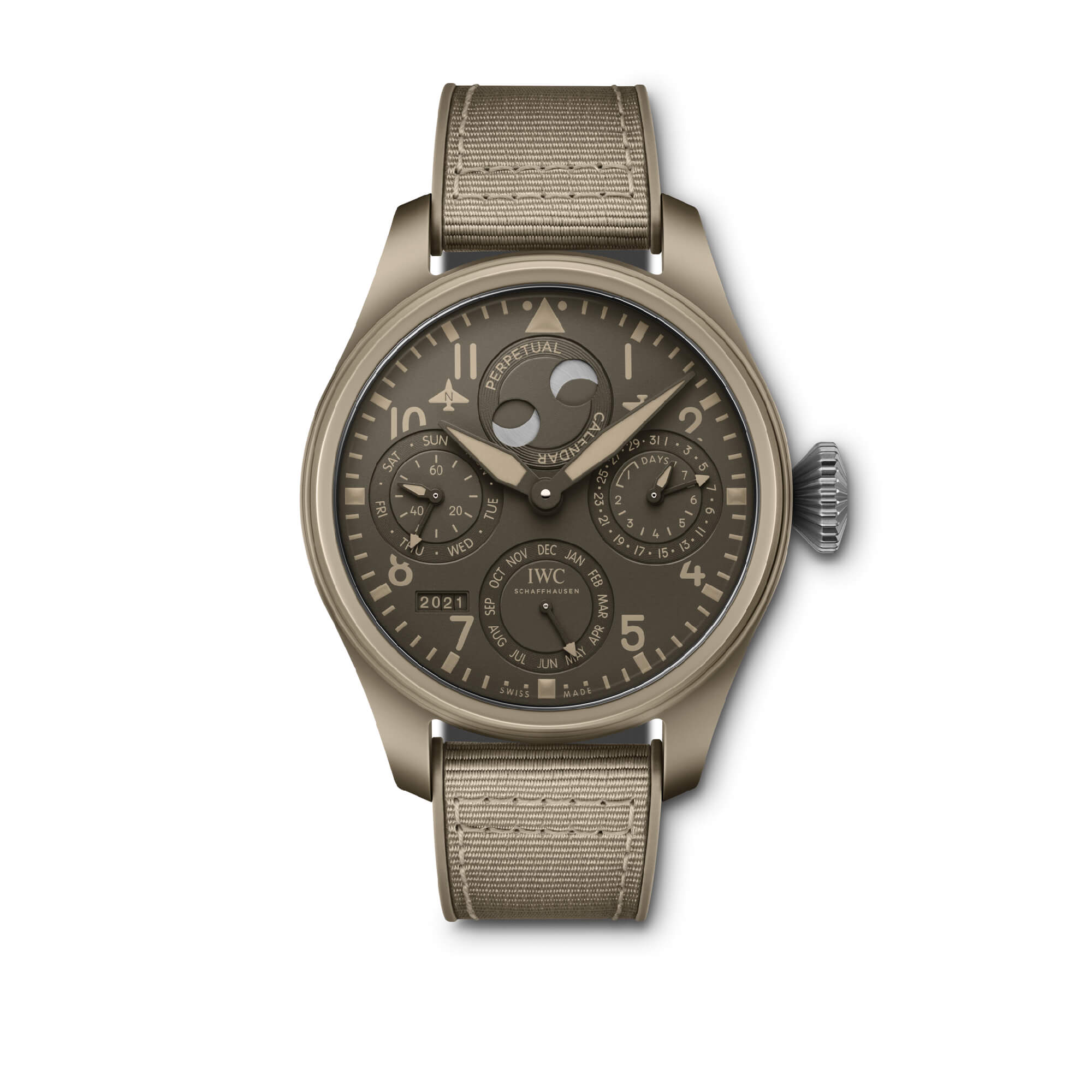 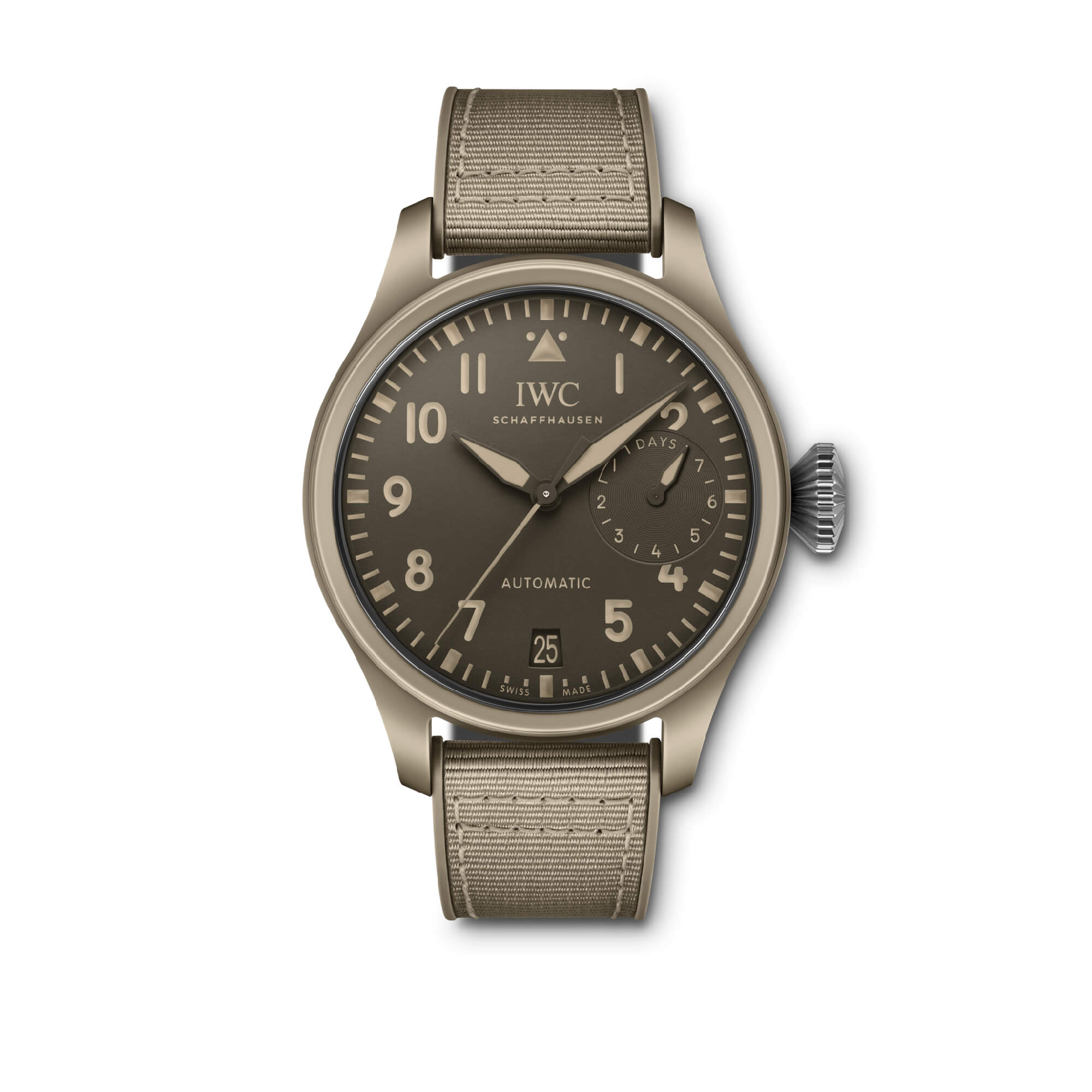 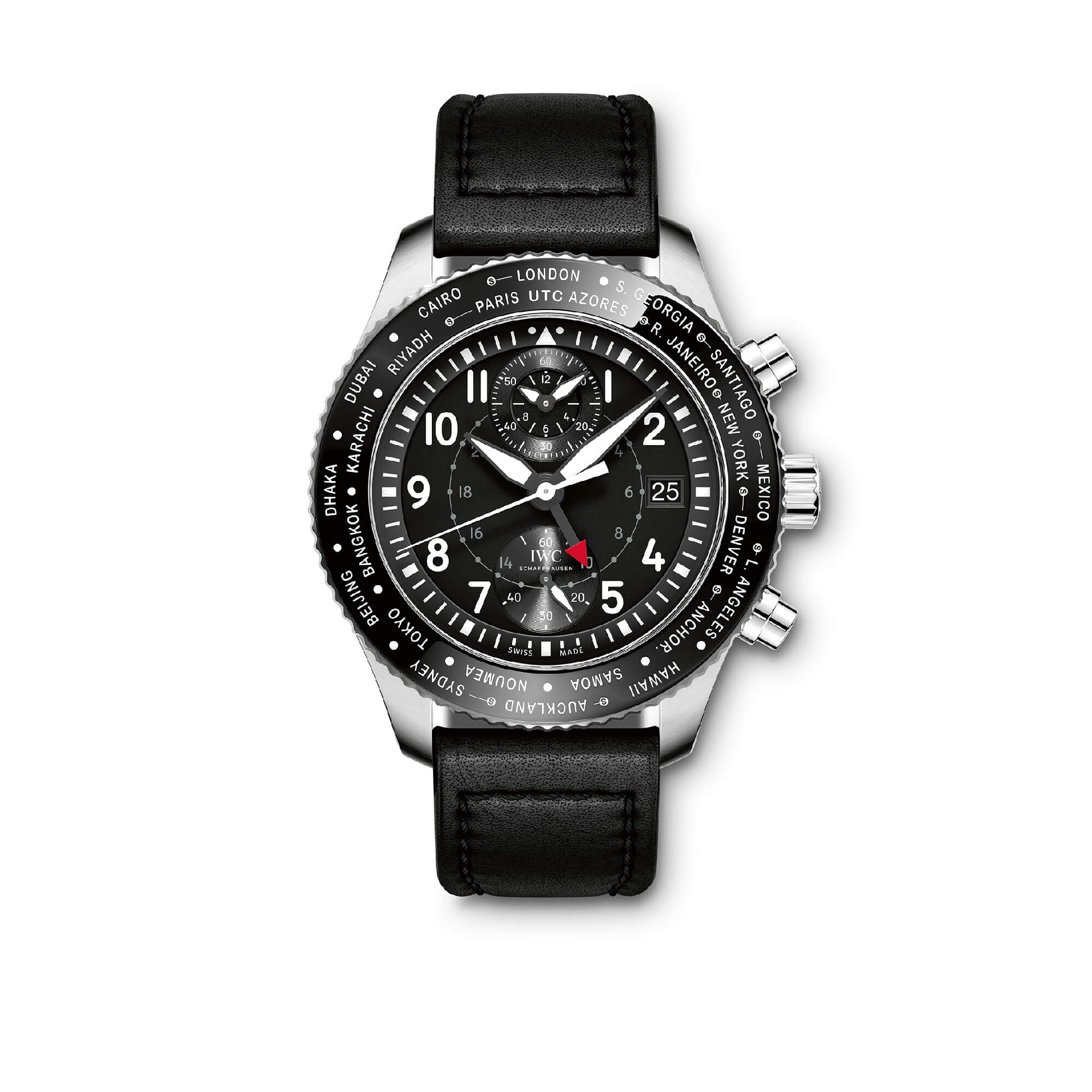 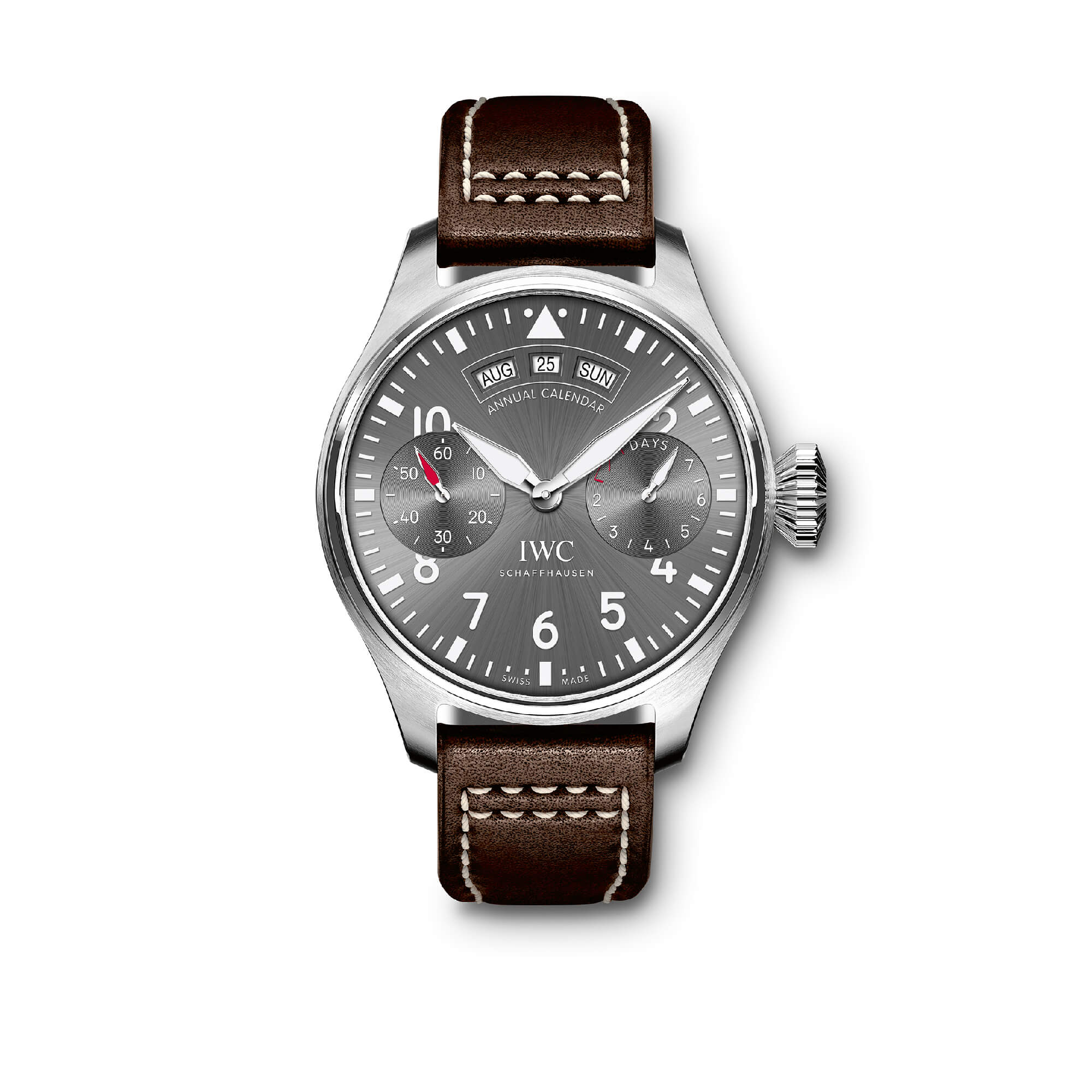 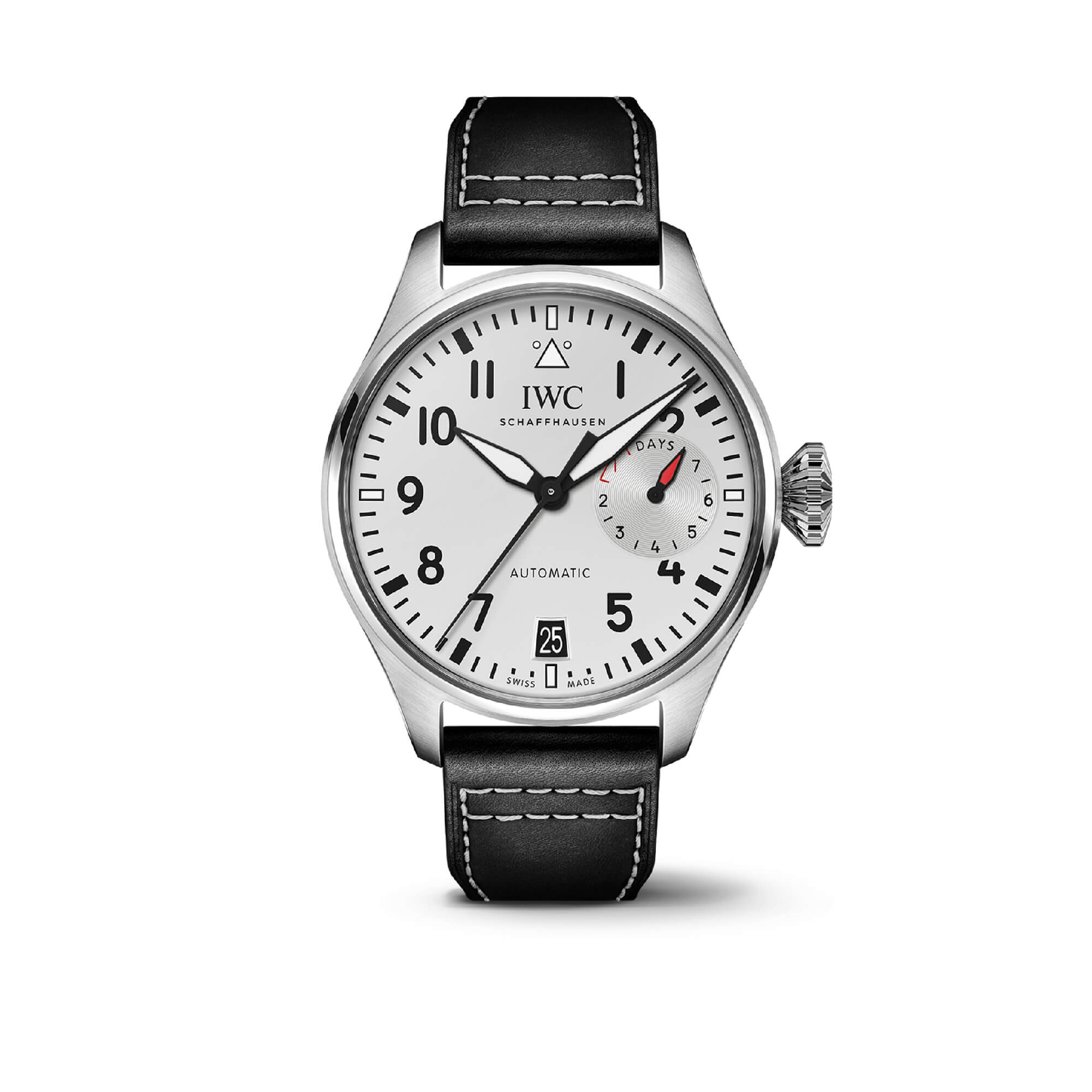 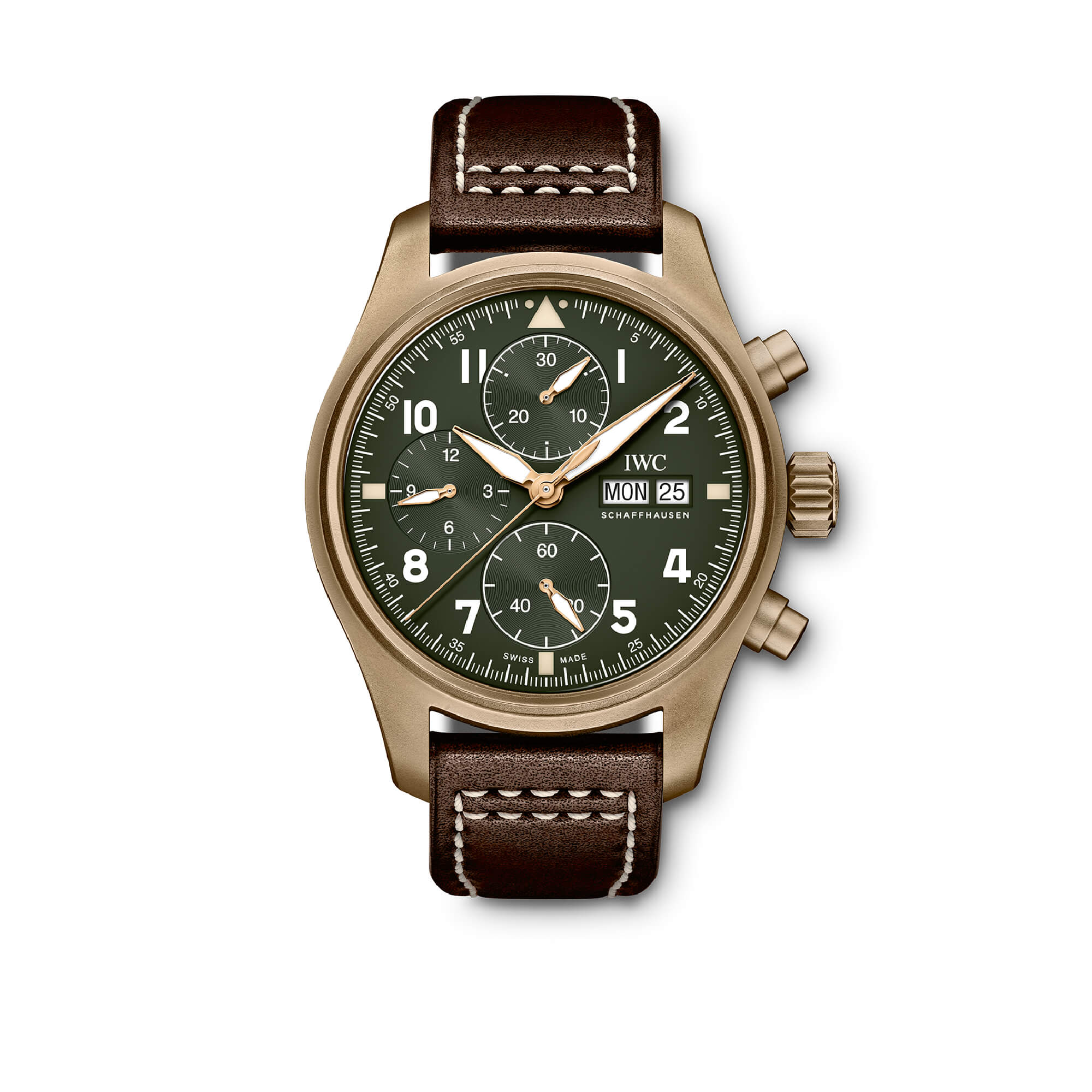 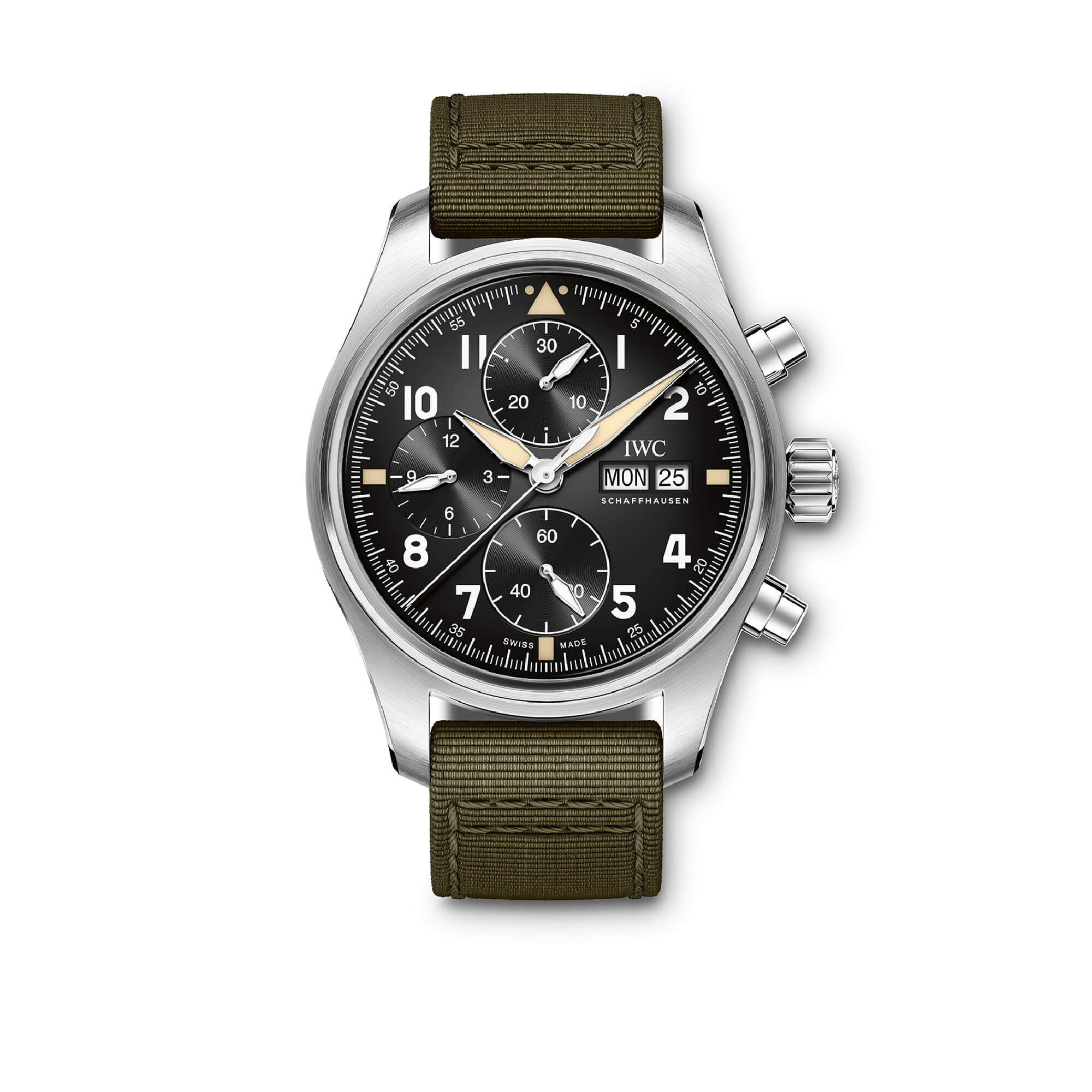 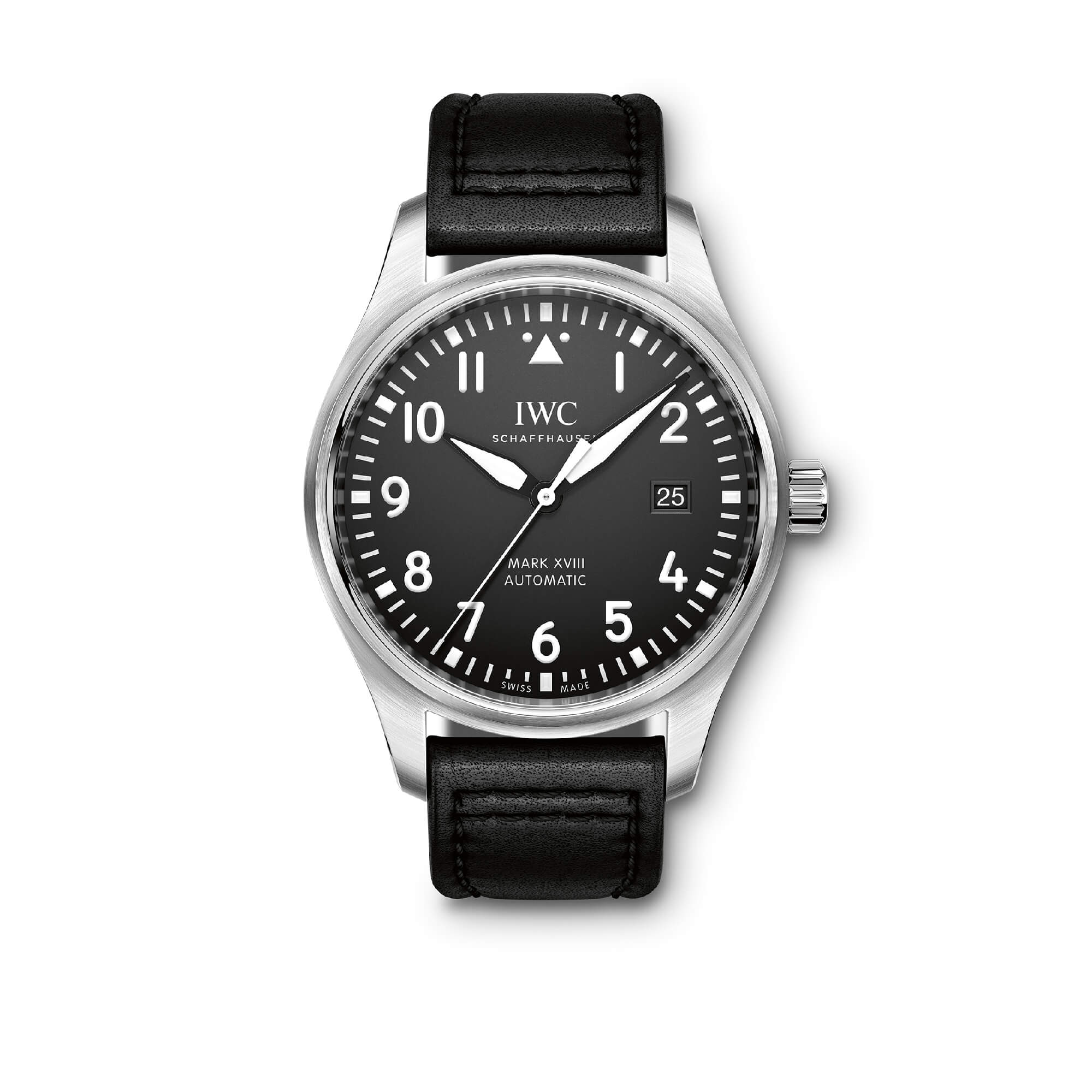 About this piece
Discover the Pilot Collection
This website uses cookies to ensure the best experience possible. More information...