You are here:
Malalan
Moments
Stories
Zenith: The Watchmaking Avantgarde 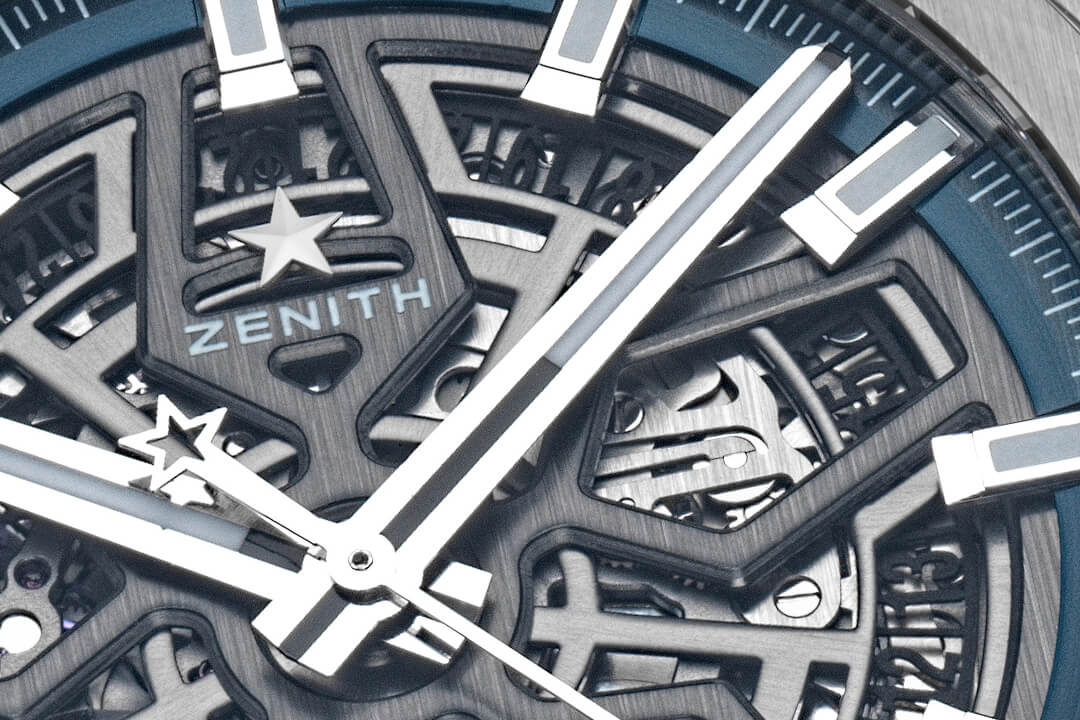 Peter Malalan
Zenith
In the time when the USA finally managed to find some peace after the devastating civil war, while in Switzerland peasants were making and assembling wristwatch movement components in winter time, in a village above the town of Neuchâtel a young innovator and watchmaking mastermind Georges Favre-Jacot had his mind on a watchmaking revolution.

Zenith Watches in this Article

Favre-Jacot implemented new approaches to the organisation of wristwatch production so efficiently in 1865, when he was only 22 years old, that they were adopted a few years later by none other than Henry Ford in the production of cars. The organization would today be called “vertical integration” but Georges Favre-Jacot primarily thought about how to unite the entire production under one roof: from metal casting for cases to the production of the smallest movement pieces. He brought his production of “in-house movements” that was entirely his own to Switzerland a century earlier than it started becoming important for the reputation of watchmaking companies. 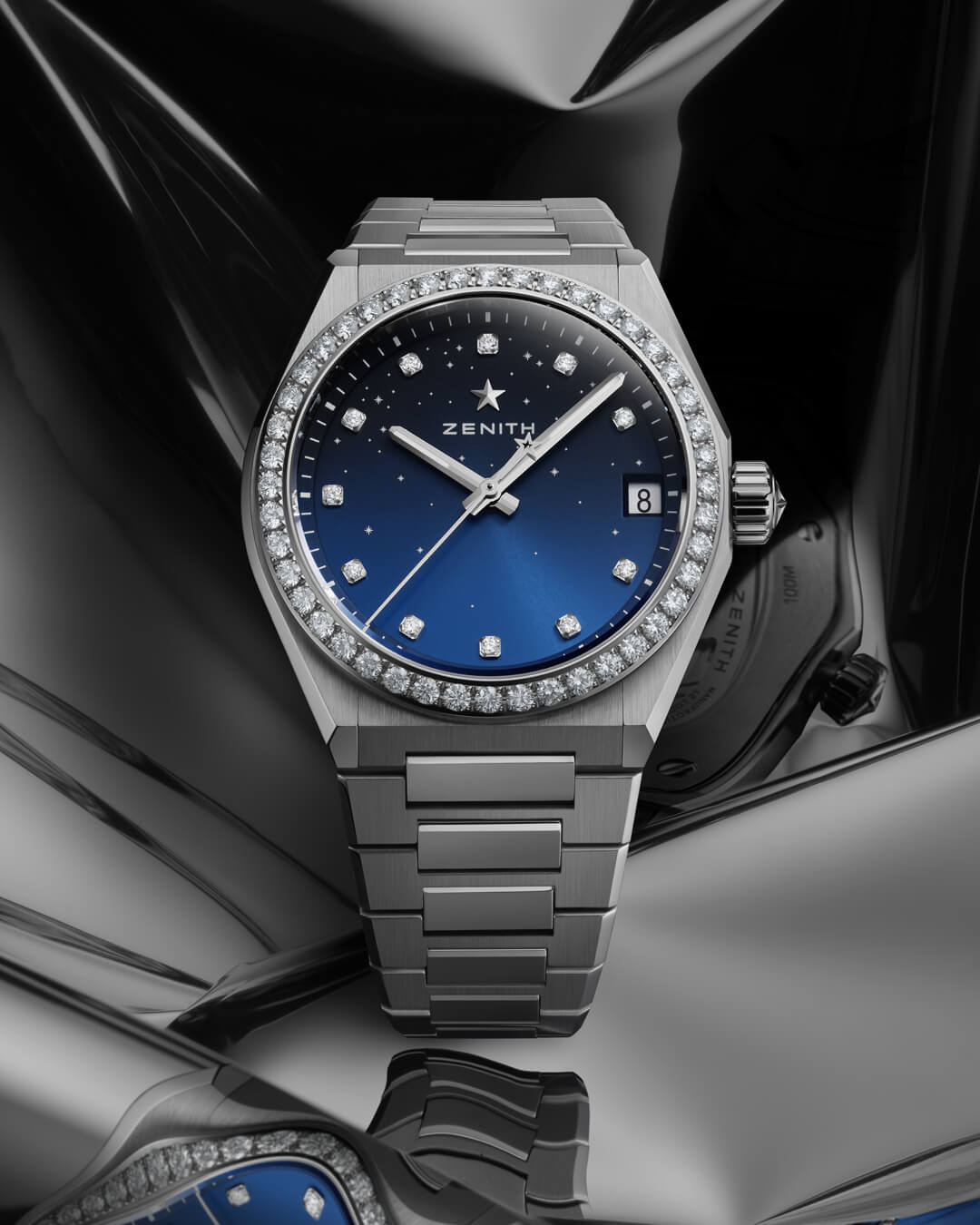 He brought his production of “in-house movements” that was entirely his own to Switzerland a century earlier than it started becoming important for the reputation of watchmaking companies.

The cradle of Watchmaking

The town of Le Locle, where Zenith has been operating for over 150 years, is today under the protection of UNESCO and is known primarily as the cradle of watchmaking. Even at the end of the 19th century, Zenith’s manufacturing was completely avant-garde due to its unique design, and primarily due to its exceptional production capacities.

At that time, the enormous windows in the spacious workshops alone were a peculiarity, and when we add the fact that these were the first premises in Le Locle to be equipped with electrical lighting, we slowly unveil the dimensions of the young leader’s vision.

Improvements also included partial automatization of work processes and the idea of components which could be installed into various mechanisms.

The advantages of uniting the entire production under one roof in one of the first modern manufactures in the world were primarily efficiency and quality control. Workshops were interconnected with roofed passages, thus sensitive parts of movements were never exposed to the influences of weather. Favre-Jacot ensured the quality primarily by regularly changing the tasks of his employees. By doing this, he avoided the monotony of production work and greatly increased the efficiency.

One of the more interesting aids were tracks on which chairs were installed and this avoided constant getting up and changing the position of the worker in respect to their workstation. Improvements also included partial automatization of work processes and the idea of components which could be installed into various mechanisms.

This had never been done in the watchmaking industry prior to Zenith. The young Georges Favre-Jacot injected the entrepreneurial spirit into everybody in the company, and this became a true tradition of the watchmaking company Zenith. 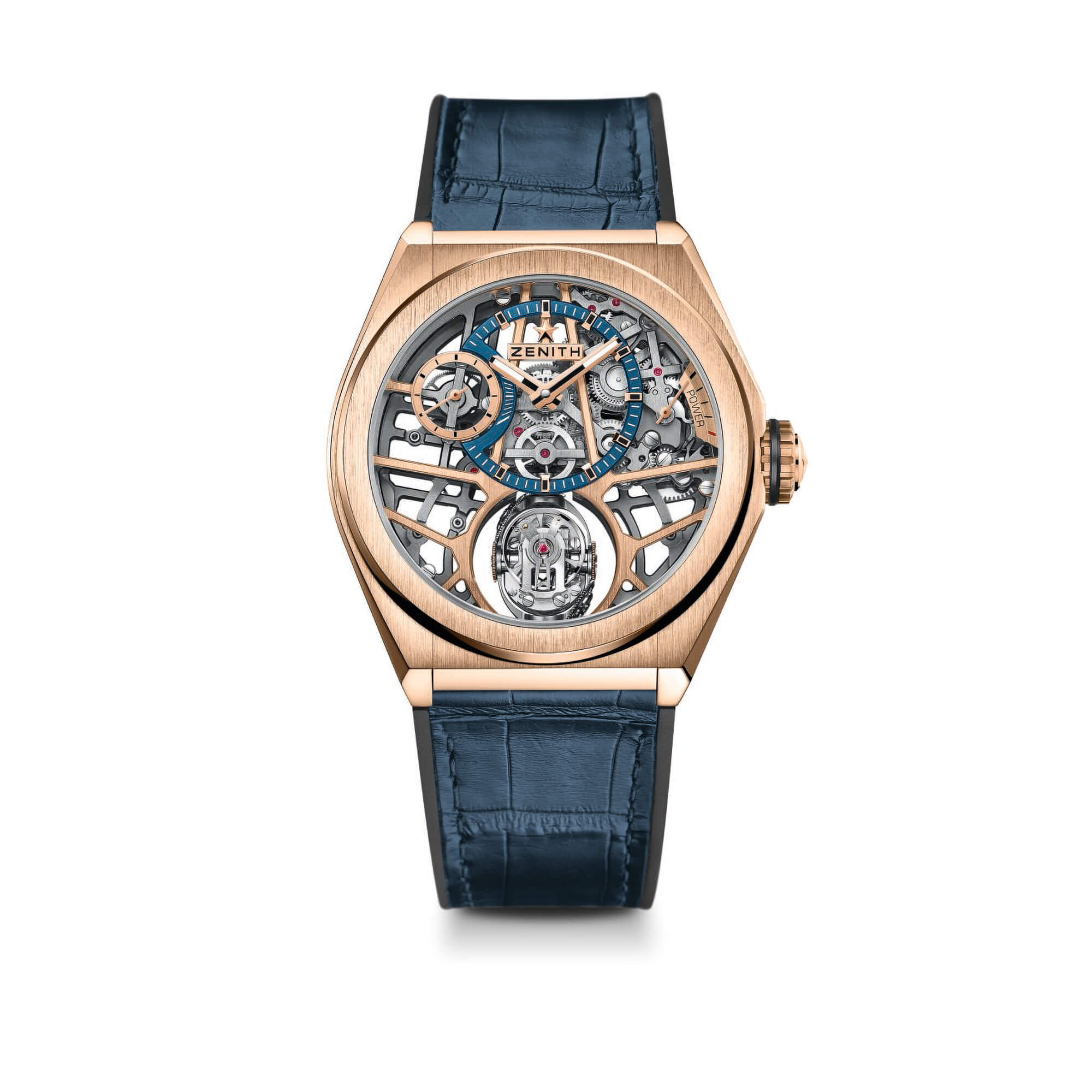 In 1891, two trains crashed in the United States of America and nine people died. The problem was that one of the trains drove to the track too soon because the driver’s watch was five minutes early. Due to this, the authorities demanded soon after that the railway staff be equipped with timepieces as precise as possible.

Zenith made it to the front with their pocket watches, the cases of which were made from one piece of metal and were resistant to dust and moisture. After 1910 the company started supplying these watches to more than 15 countries all over the world. Nevertheless, they did not rest; in Switzerland, they equipped several railway stations with their timepieces, their wristwatches were worn by the staff, and they were also used to time the duration of telephone calls in phone booths.

A few decades later, Zenith started writing a very special chapter the leading role in which is played by the chronograph. They marked the 1960s with the development of a chronograph with automatic winding. Until then, wristwatches with the function of the stopwatch had to be wound manually, since the making of such a movement is fairly complex.

Generally, at the time automatic winding was usual in movements that simply told the time, while the challenge of an automatic chronograph was also tackled by a number of Zenith’s competitors at the time. While others installed the function of a stopwatch into the movements as an additional module and thus increased the dimensions of their timepieces, Zenith integrated additional cogwheels into a completely new calibre marked 3019 PHC, today known as El Primero: the first automatic mechanical chronograph for the wristwatch. 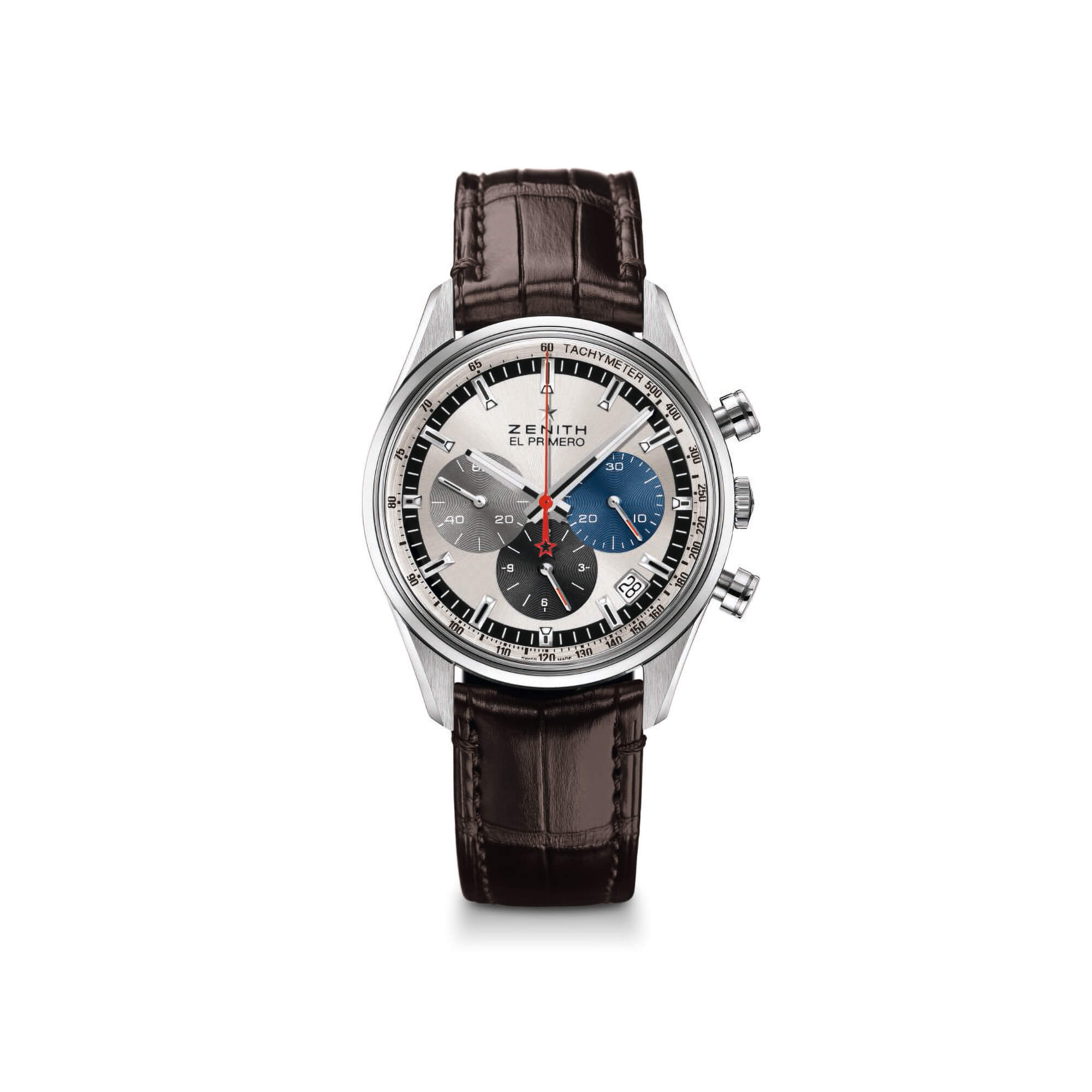 Zenith did not pride itself only on the first automatic chronograph in a wristwatch, their movement ticked with the frequency of 10Hz, and time could be measured to a tenth of a second which was incredible for that time. The reliability of their timepiece was demonstrated by attaching it to the landing mechanism of Boeing 707 and thus exposing it to external influences during a flight from Paris to New York.

In the 26 minutes, which the plane needed to ascend to 10,700 metres, the temperature changed from 4°C to -62°C, while the watch worked as flawlessly after the landing as it did upon the take-off. All it needed was a minor correction of the hands: what needed to be adjusted was the time zone!

The reliability of their timepiece was demonstrated by attaching it to the landing mechanism of Boeing 707 and thus exposing it to external influences during a flight from Paris to New York. 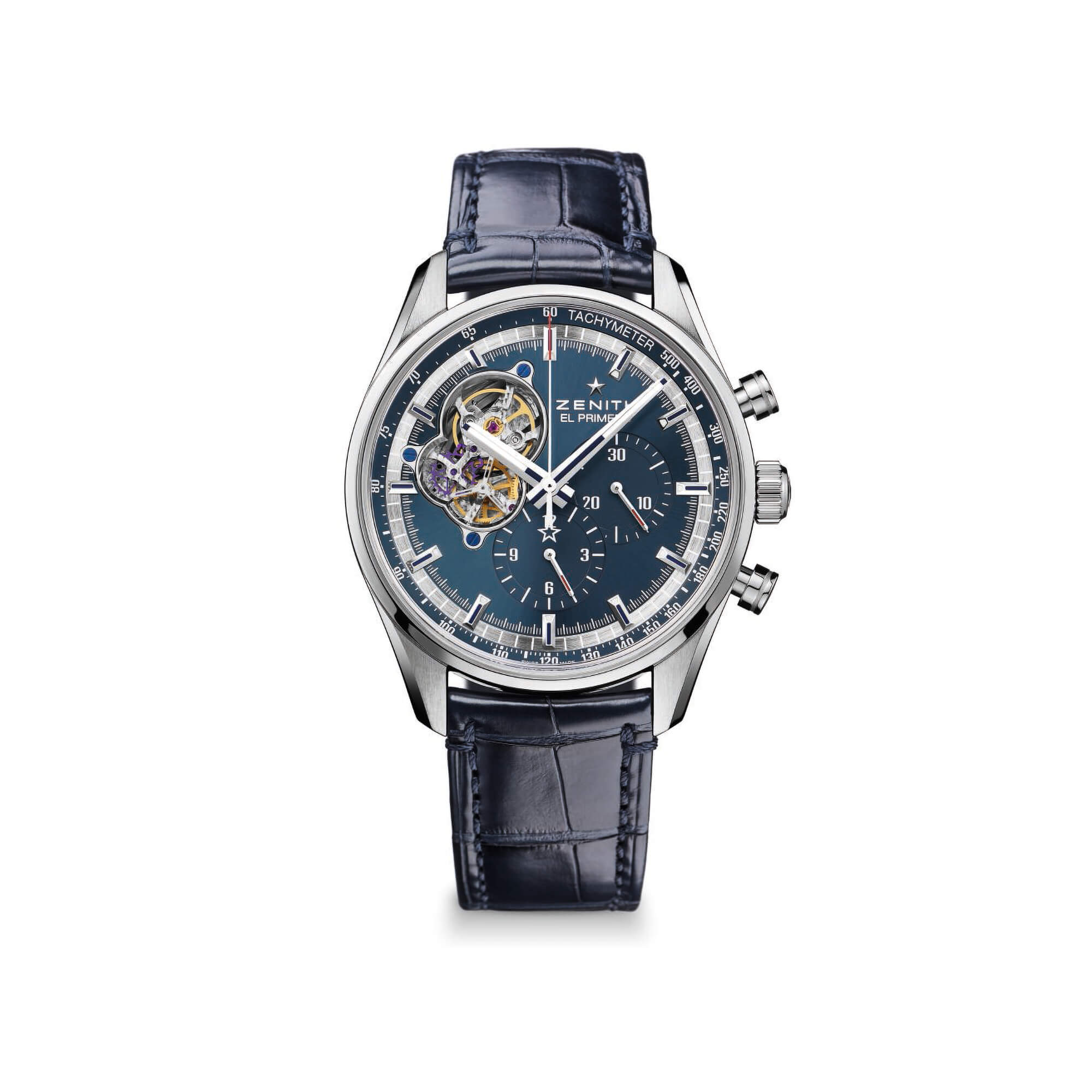 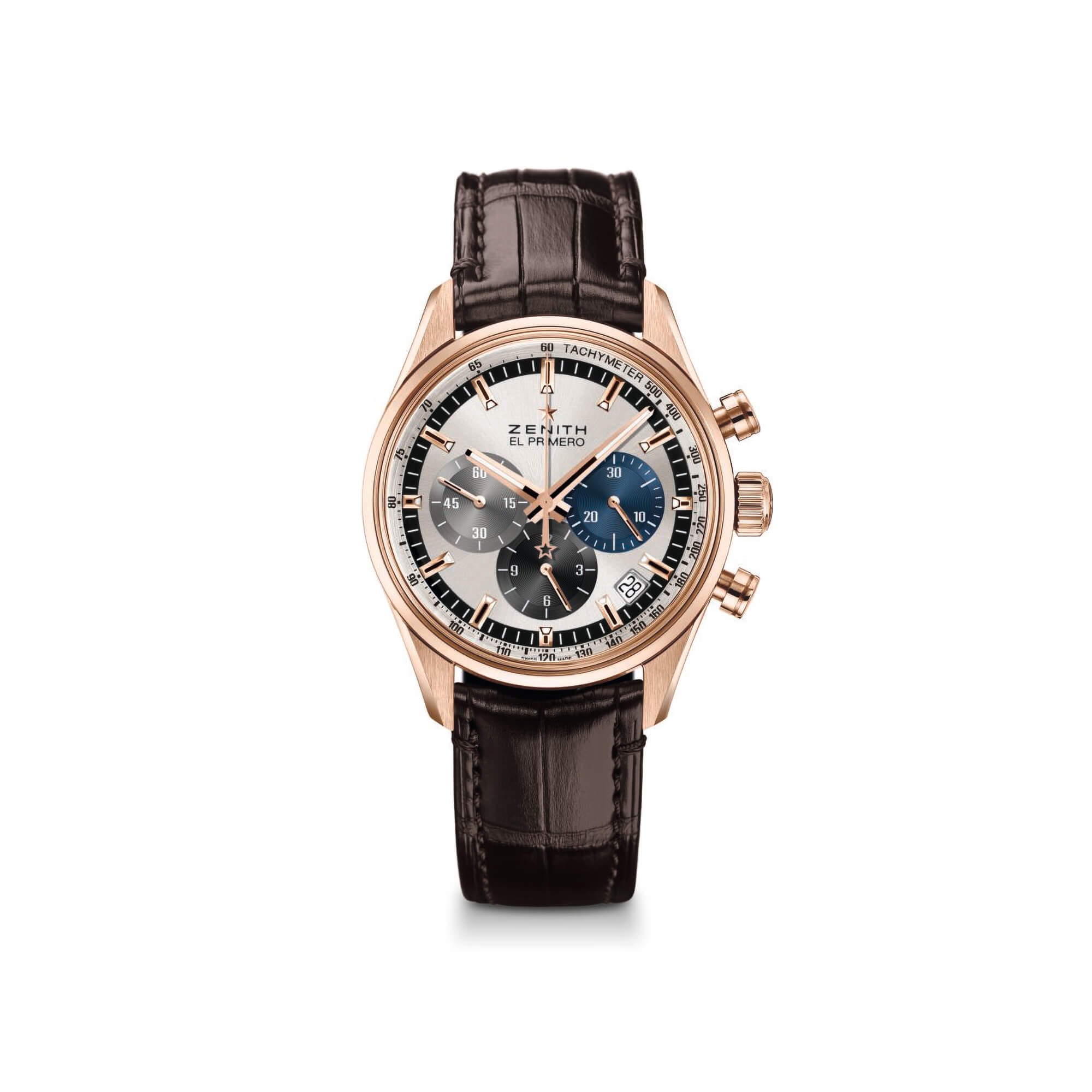 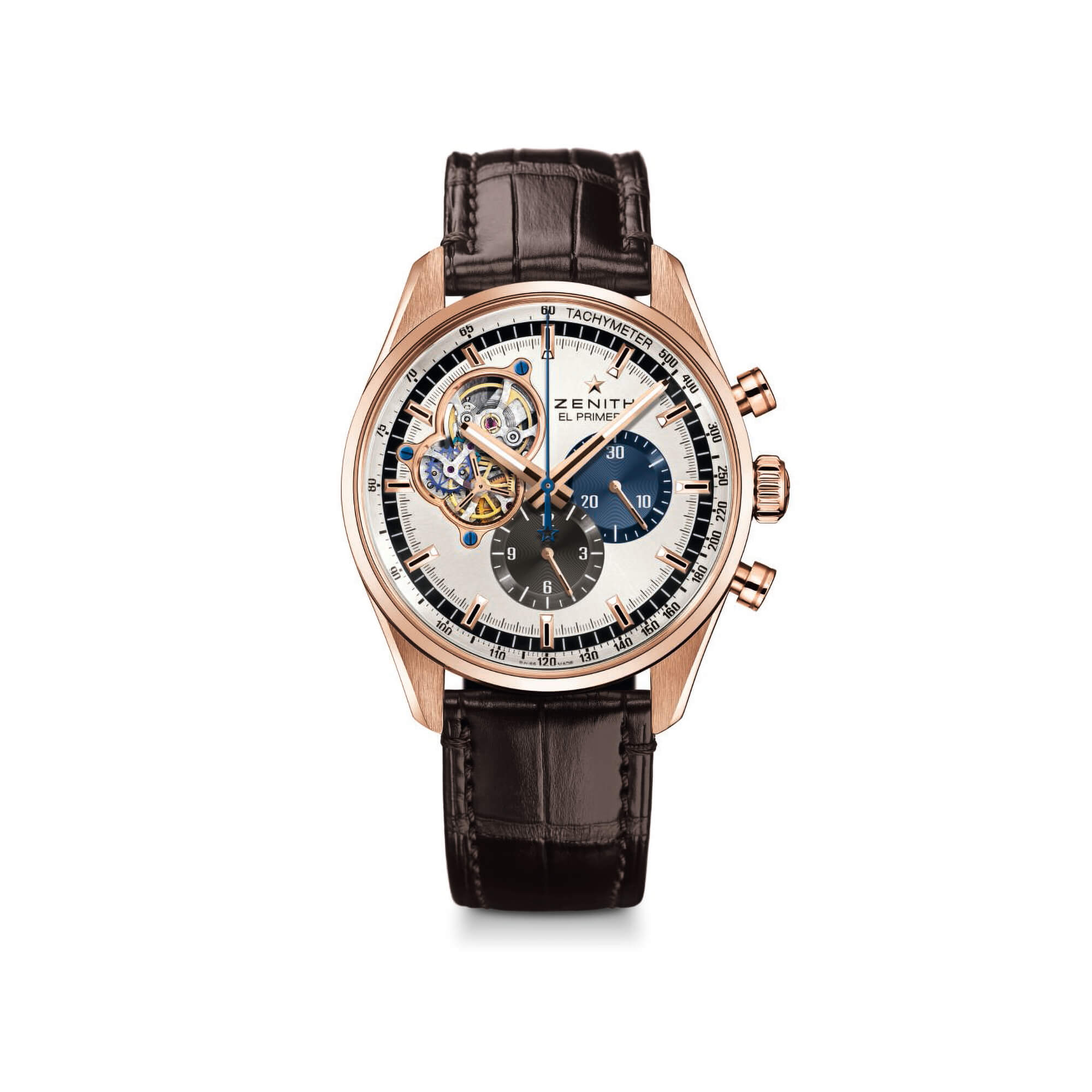 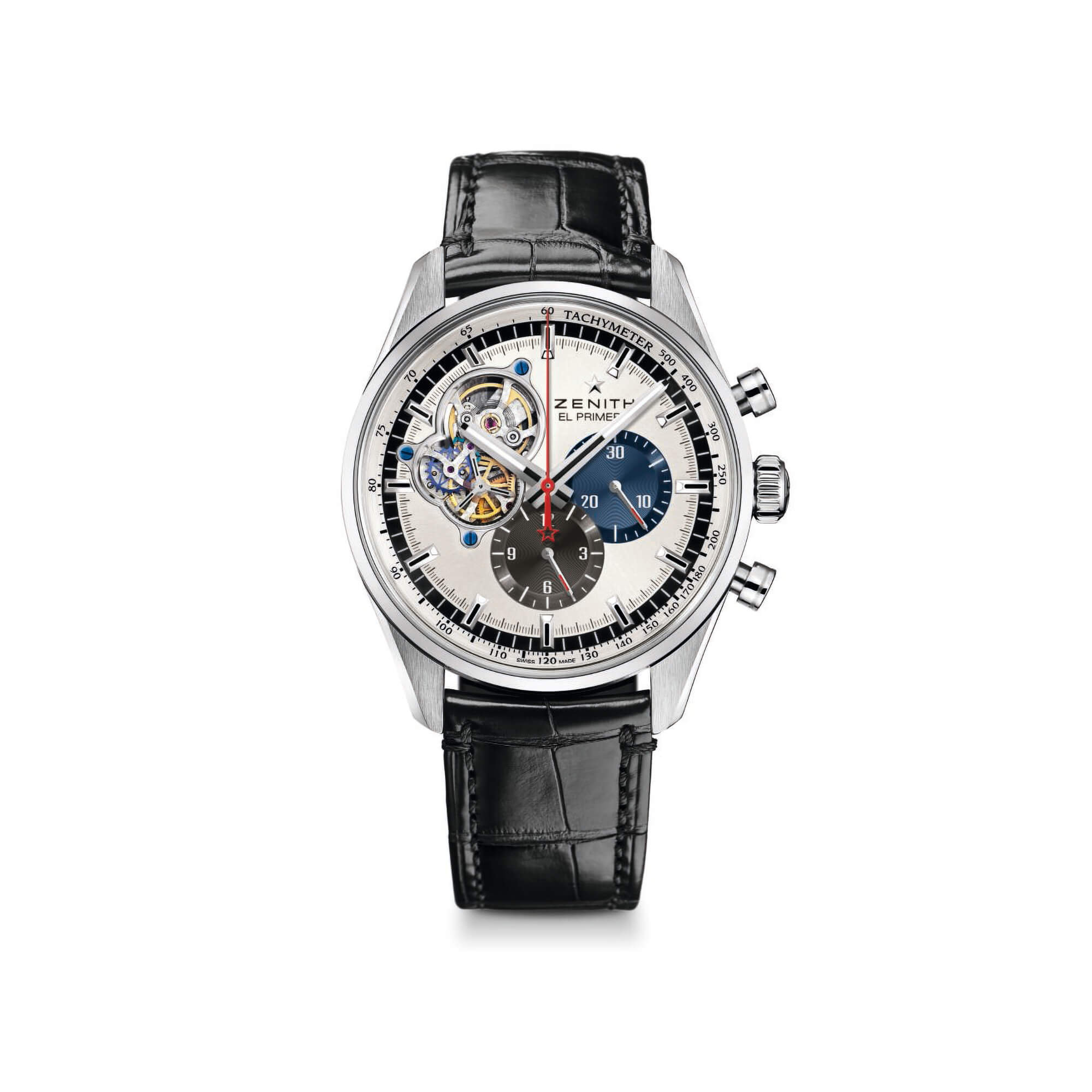 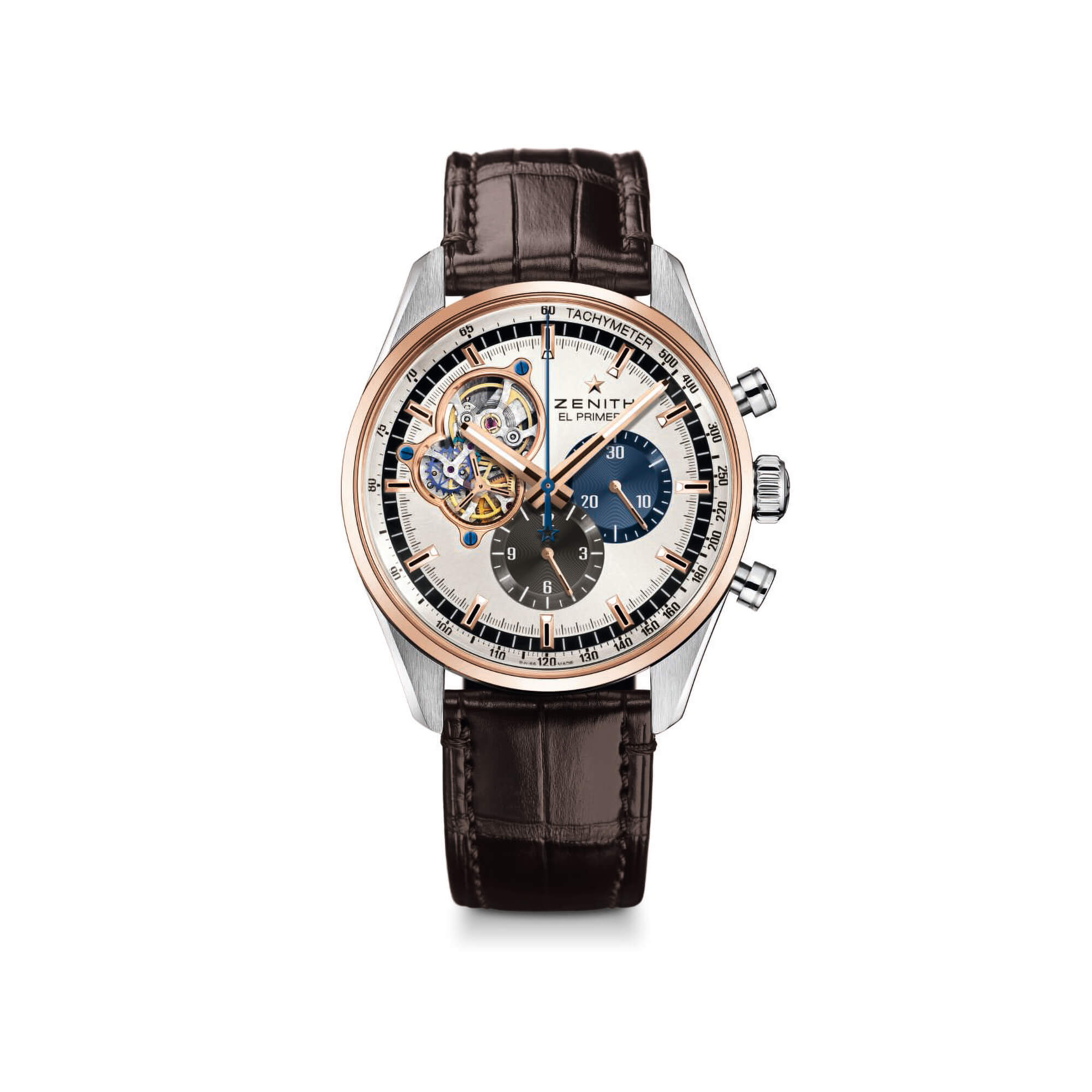 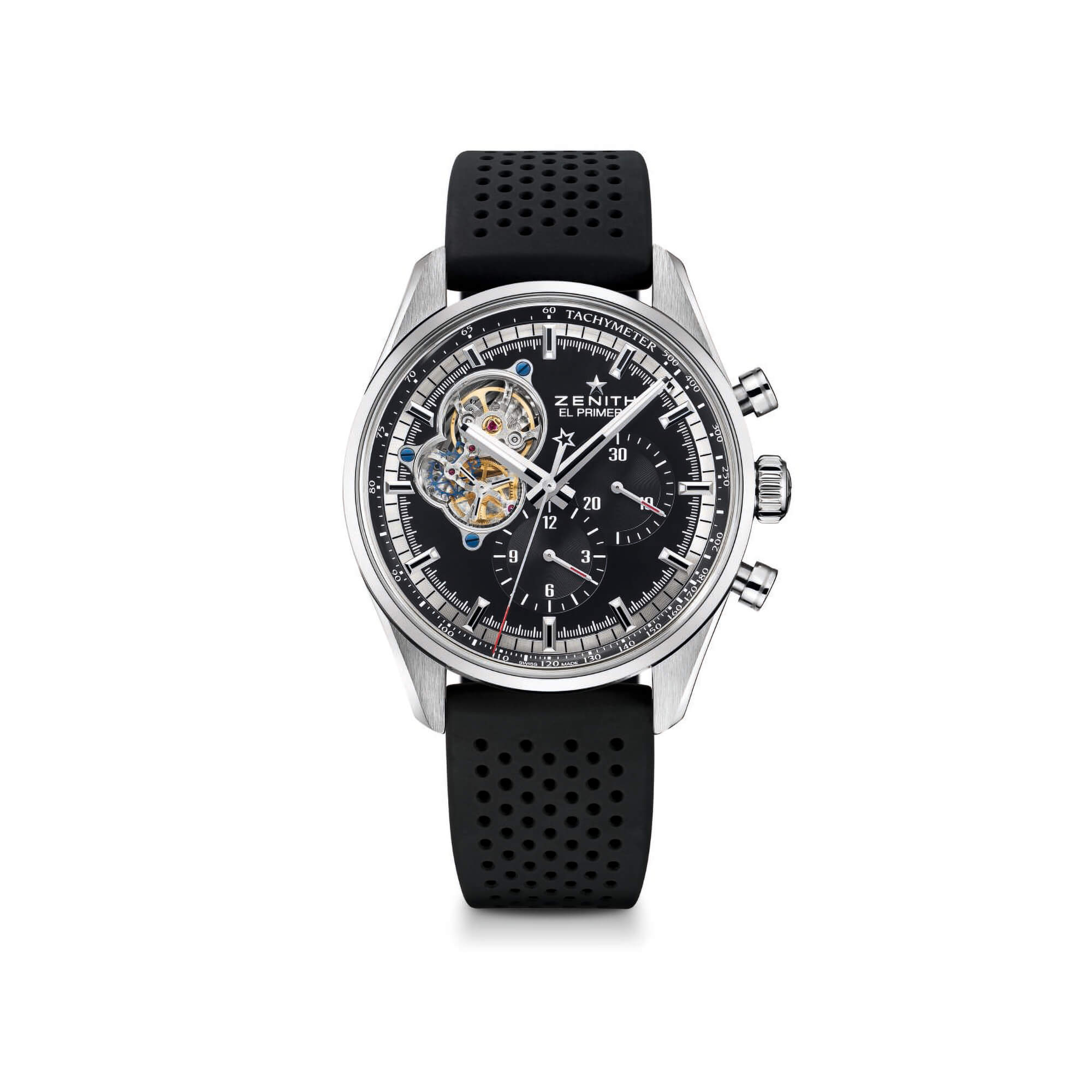 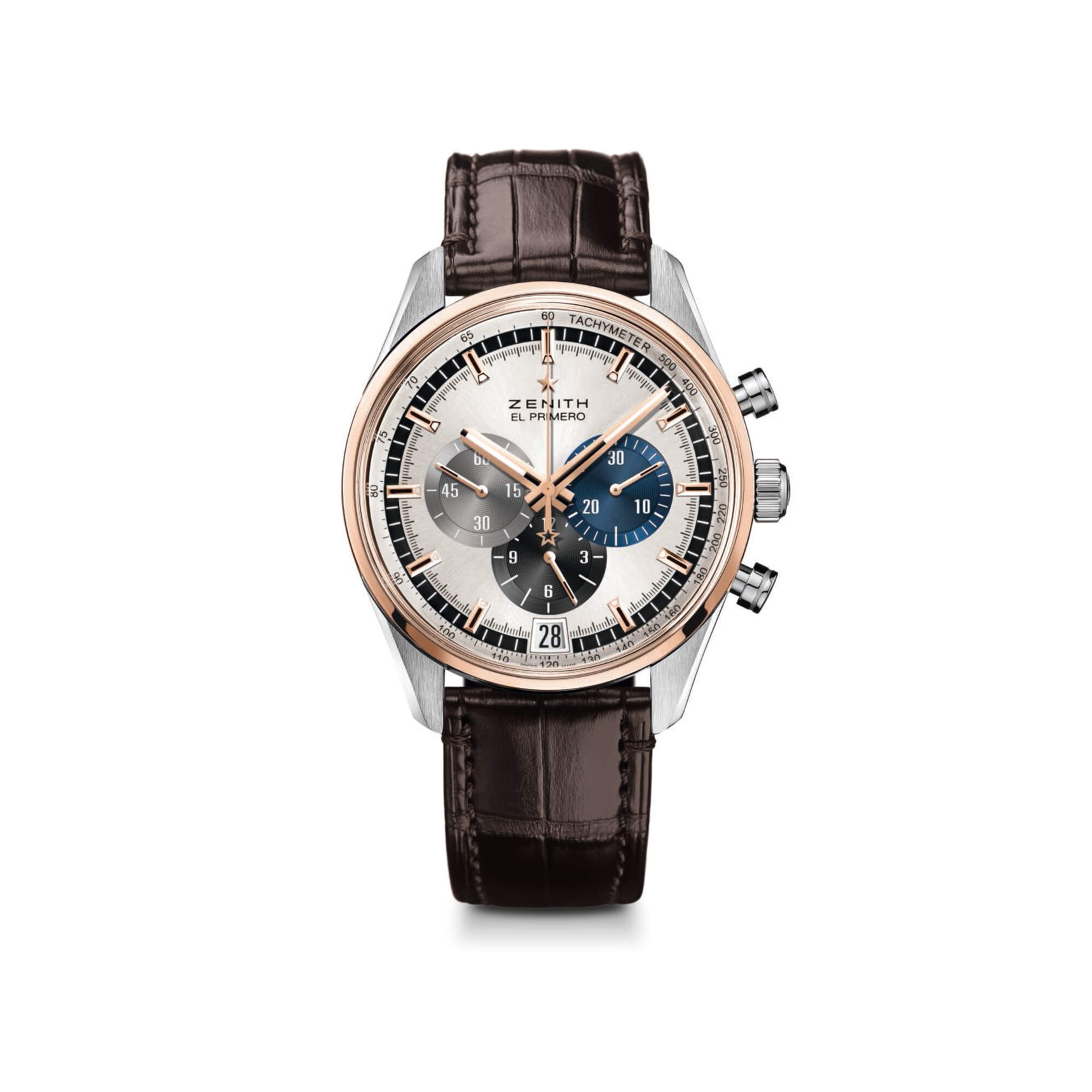 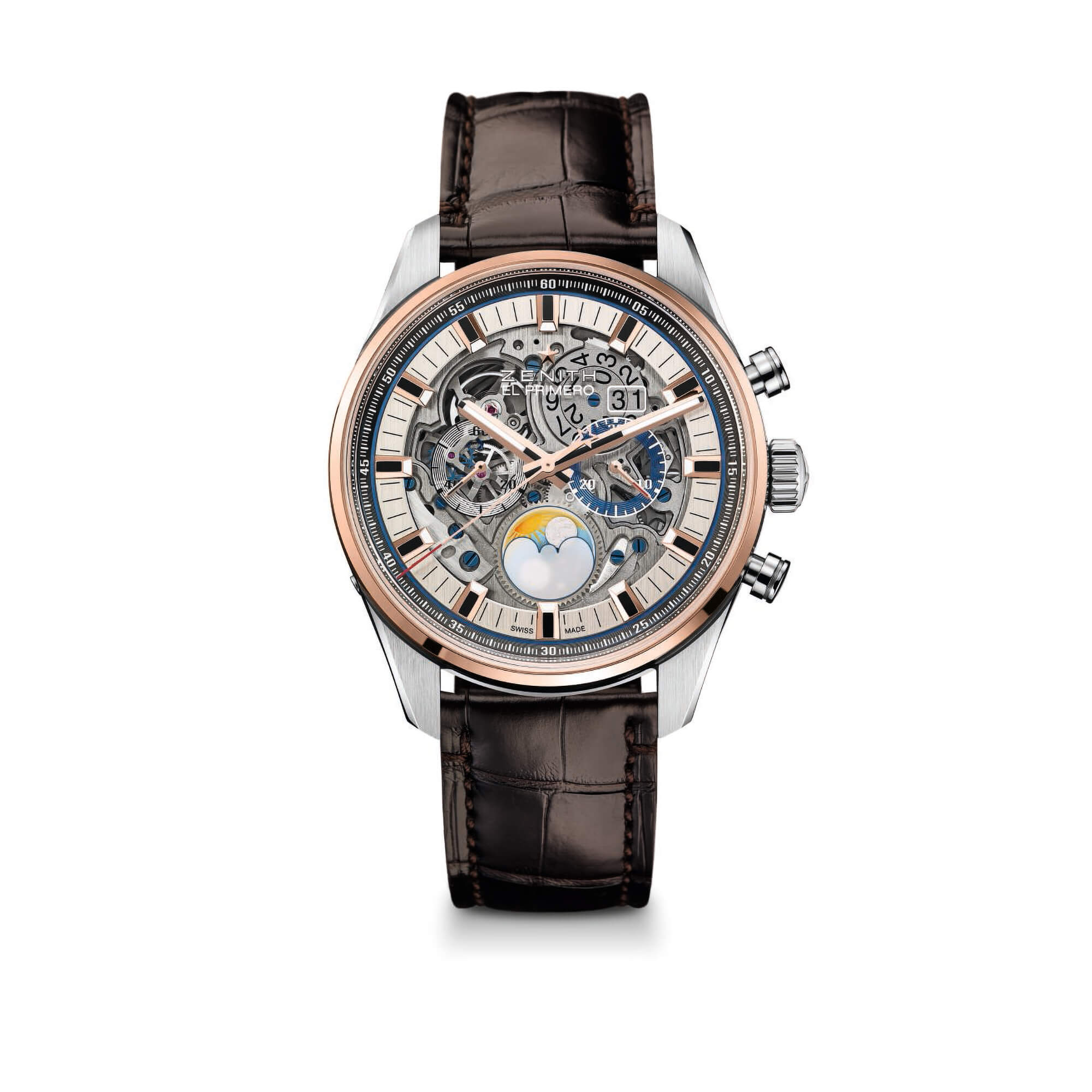 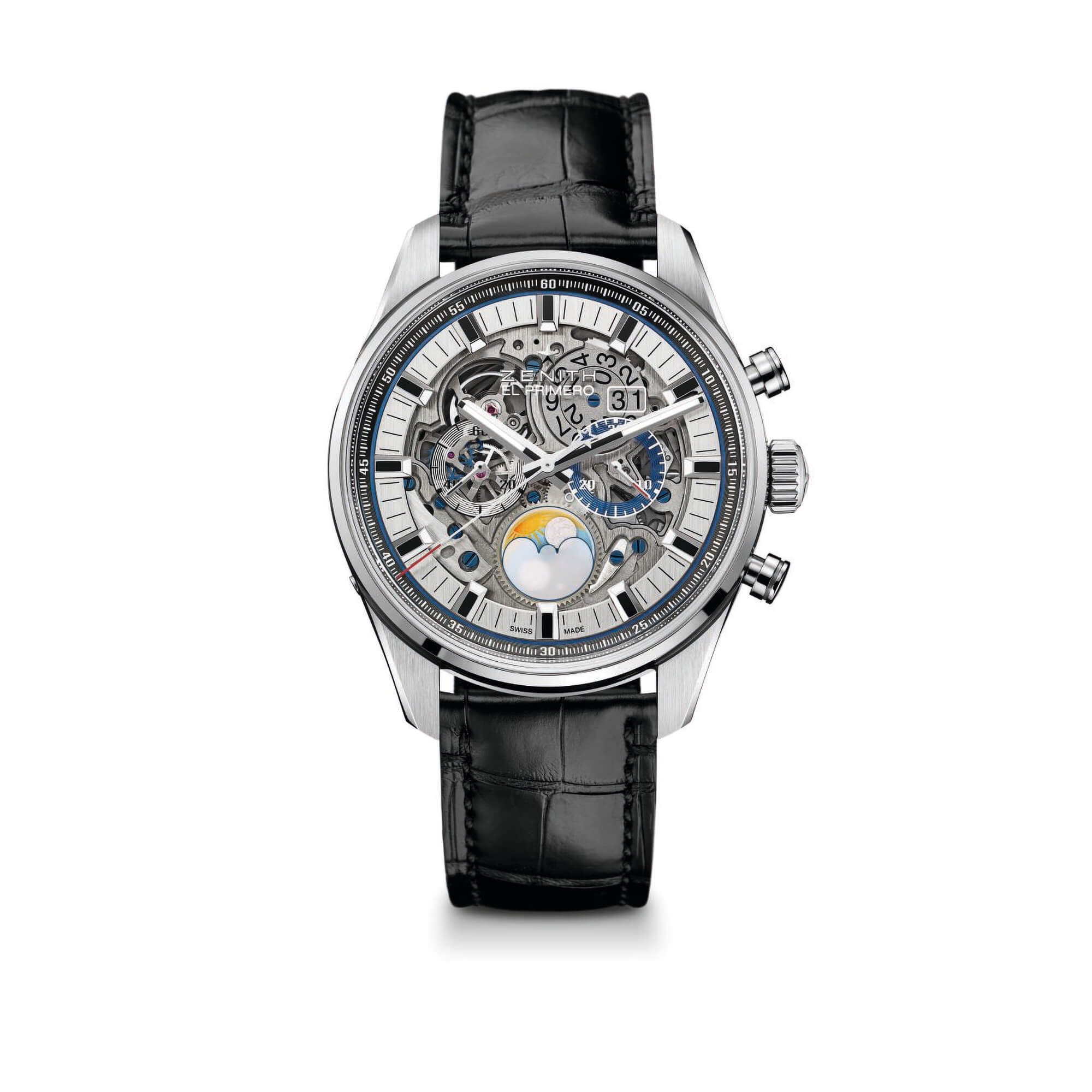 The legend of the El Primero movement is still developing today, while through the years Zenith has been adding ever new complications and receiving numerous awards for its achievements. In 2017, the chronograph DEFY El Primero 21 was presented, which measures time to one hundredth of a second accurately, which is ten times more precisely than its famous predecessor the El Primero.

It is this accuracy that is the reason why the seconds hand makes one turn every second around the dial, while the hundredth of a second in which we stopped the chronograph can be read from the scale engraved in the inner bezel. DEFY with its futuristic DNA has now given rise to a full-fledged collection featuring several degrees of mechanical complexity, starting with the new Defy Classic, a three-hand plus date watch.

With its case forged from ultra-light titanium, its blackened skeleton movement, its star-shaped openworked dial and its shade of blue reflecting the collection’s original colour, this Zenith watch propels into a whole new dimension according to the directions of its avant-garde founder. 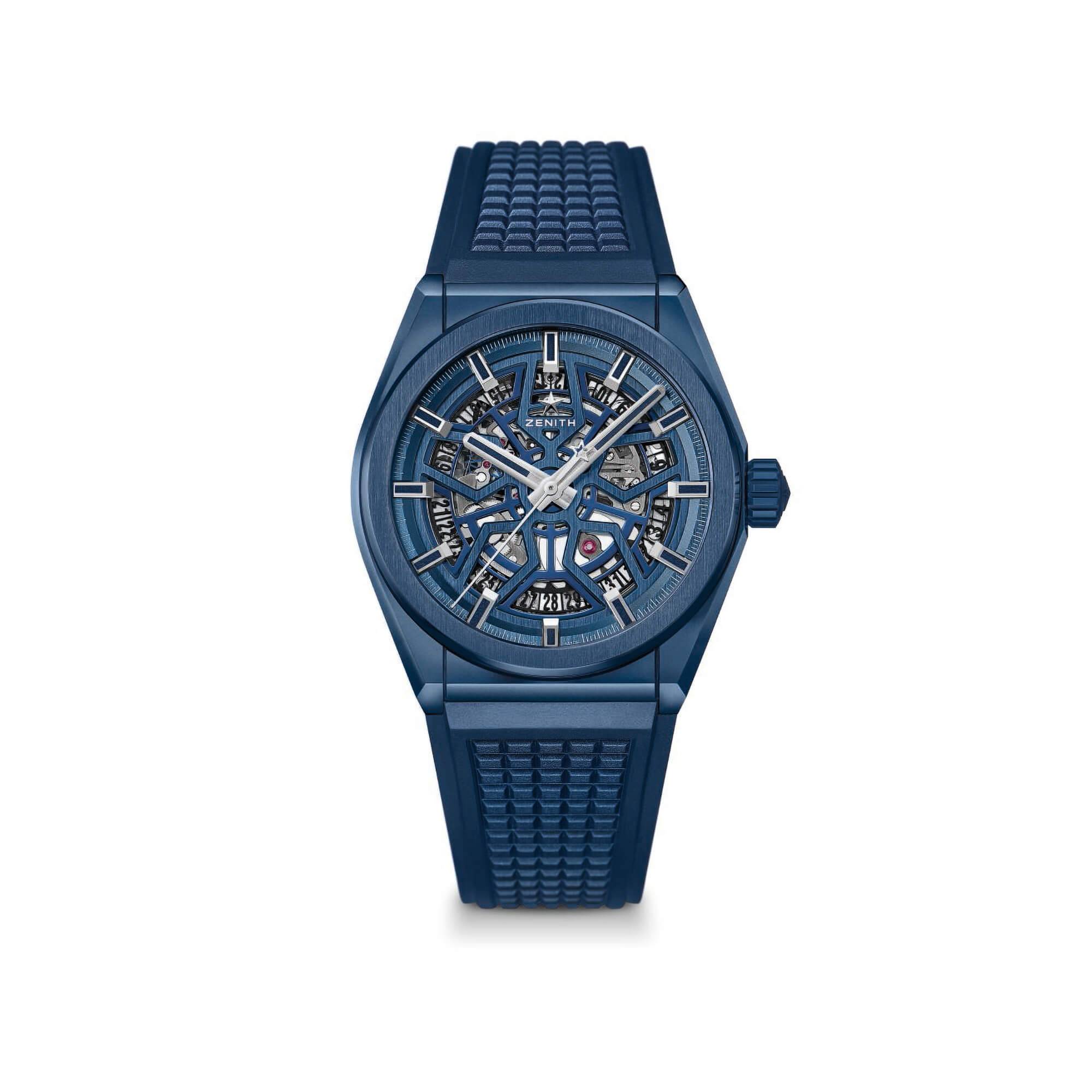 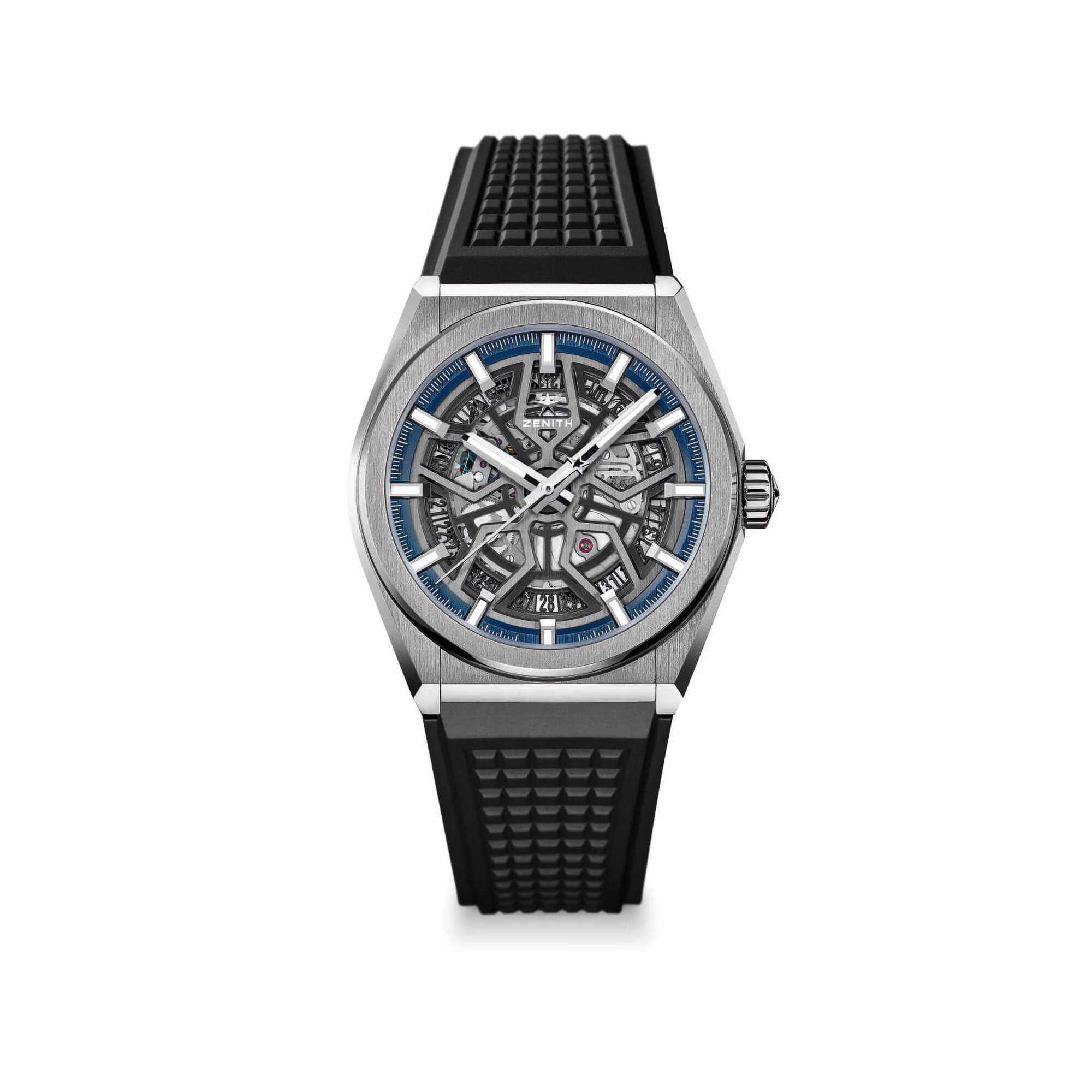 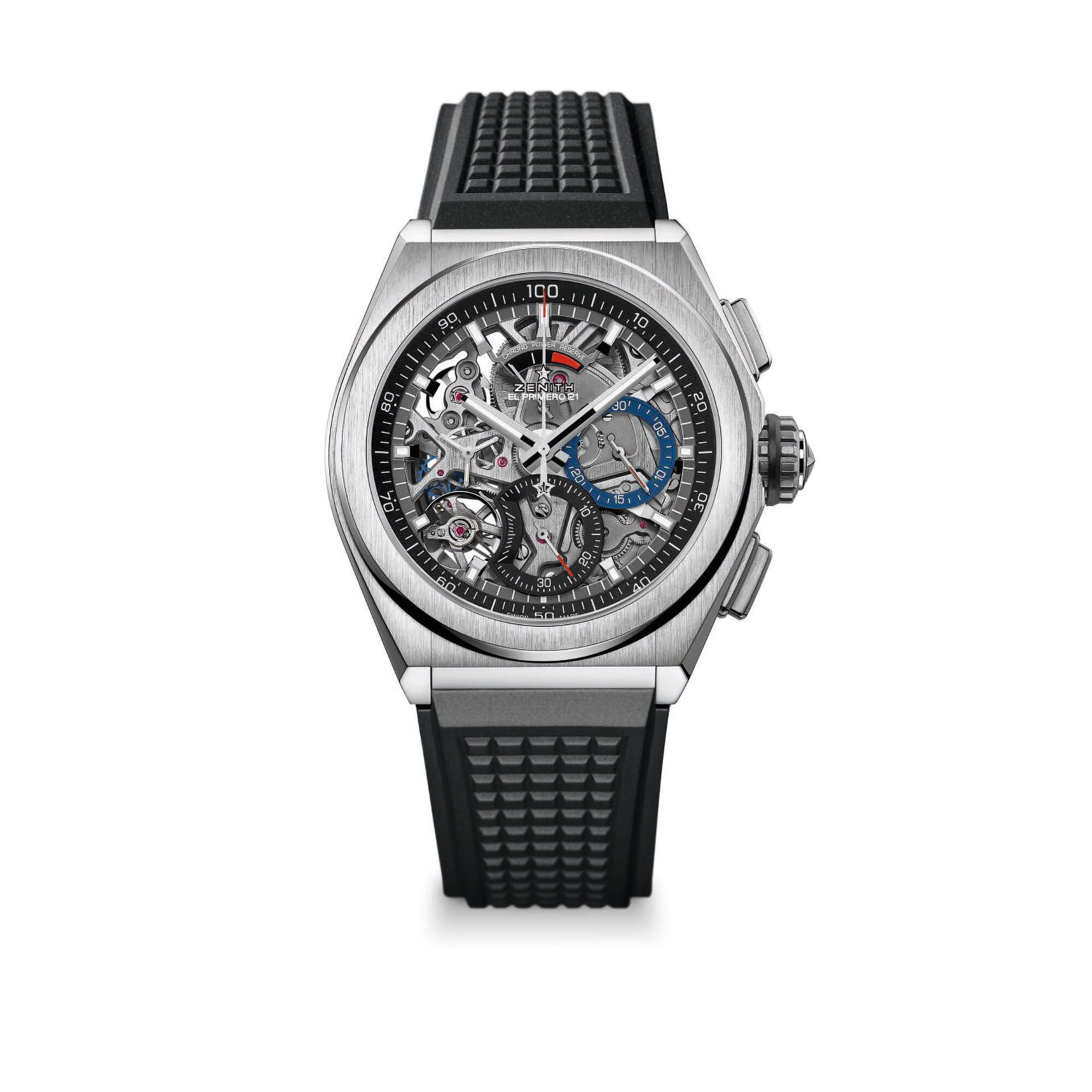 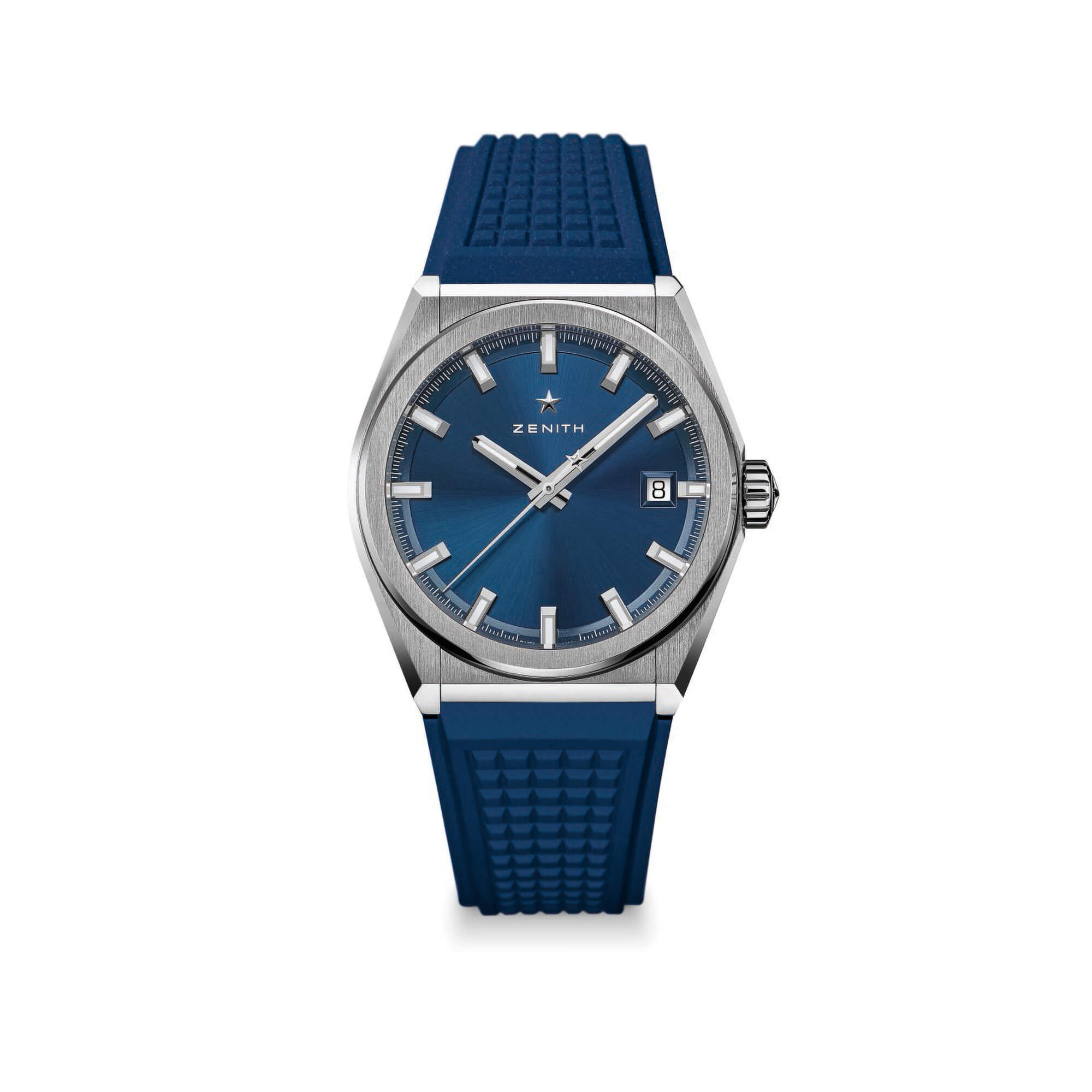 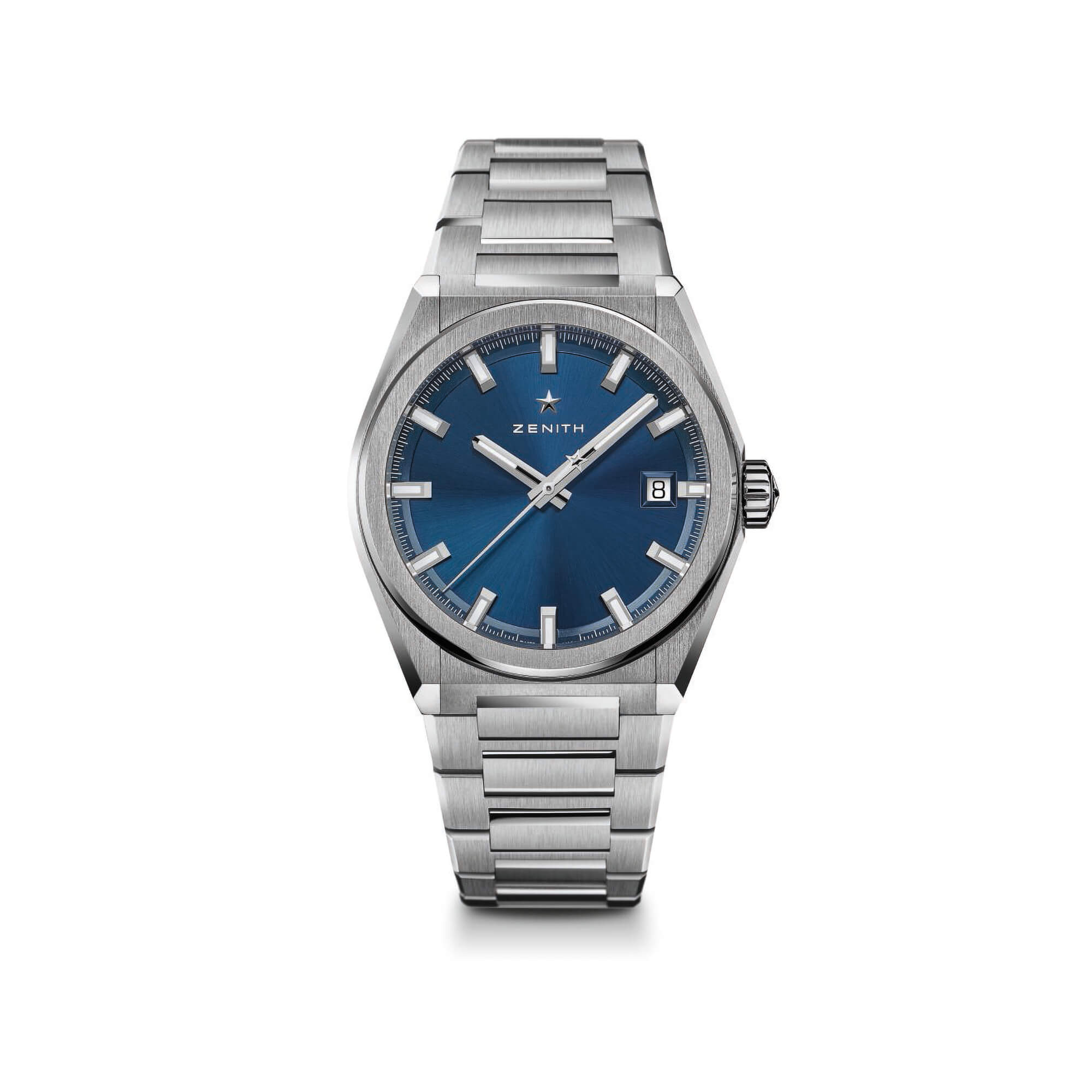 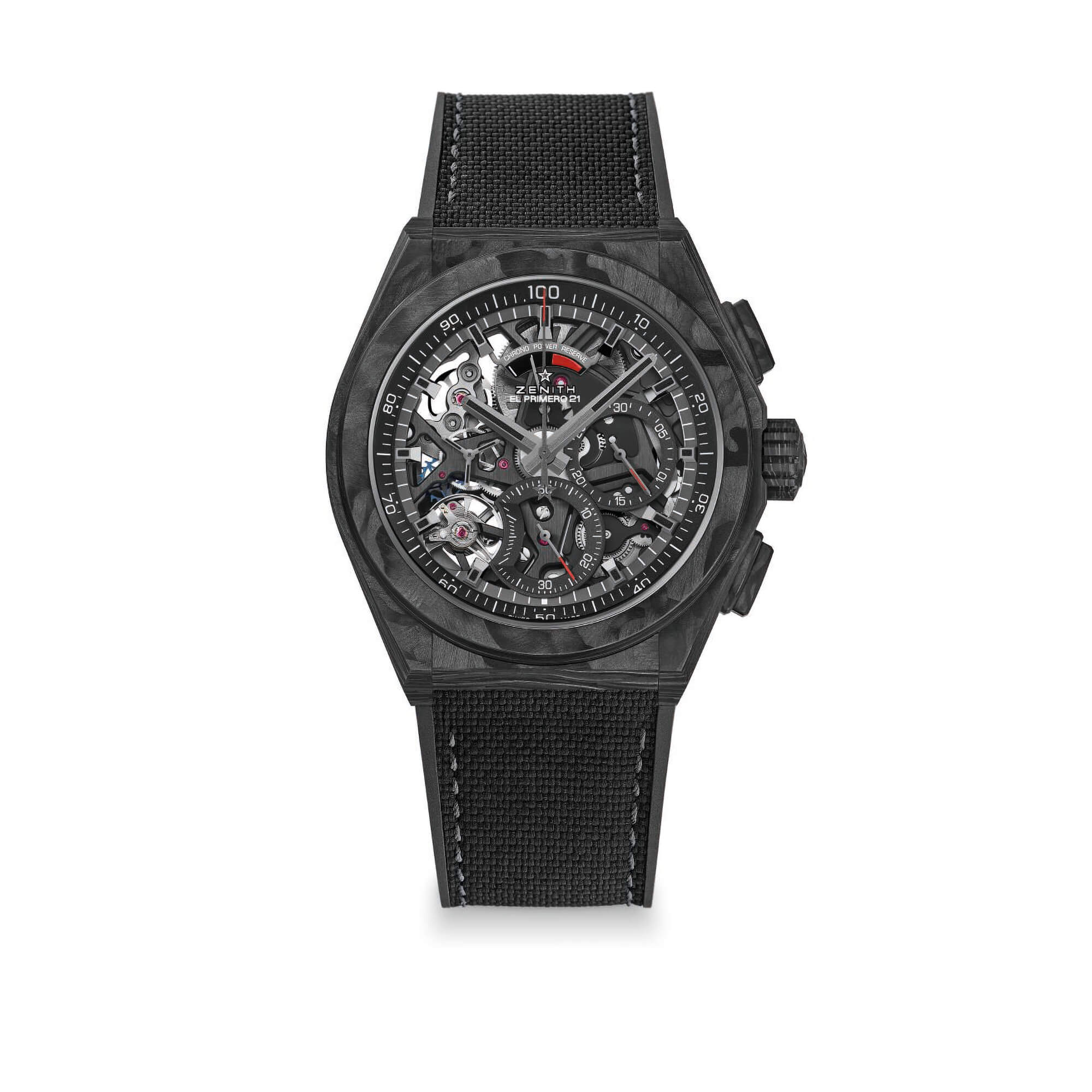 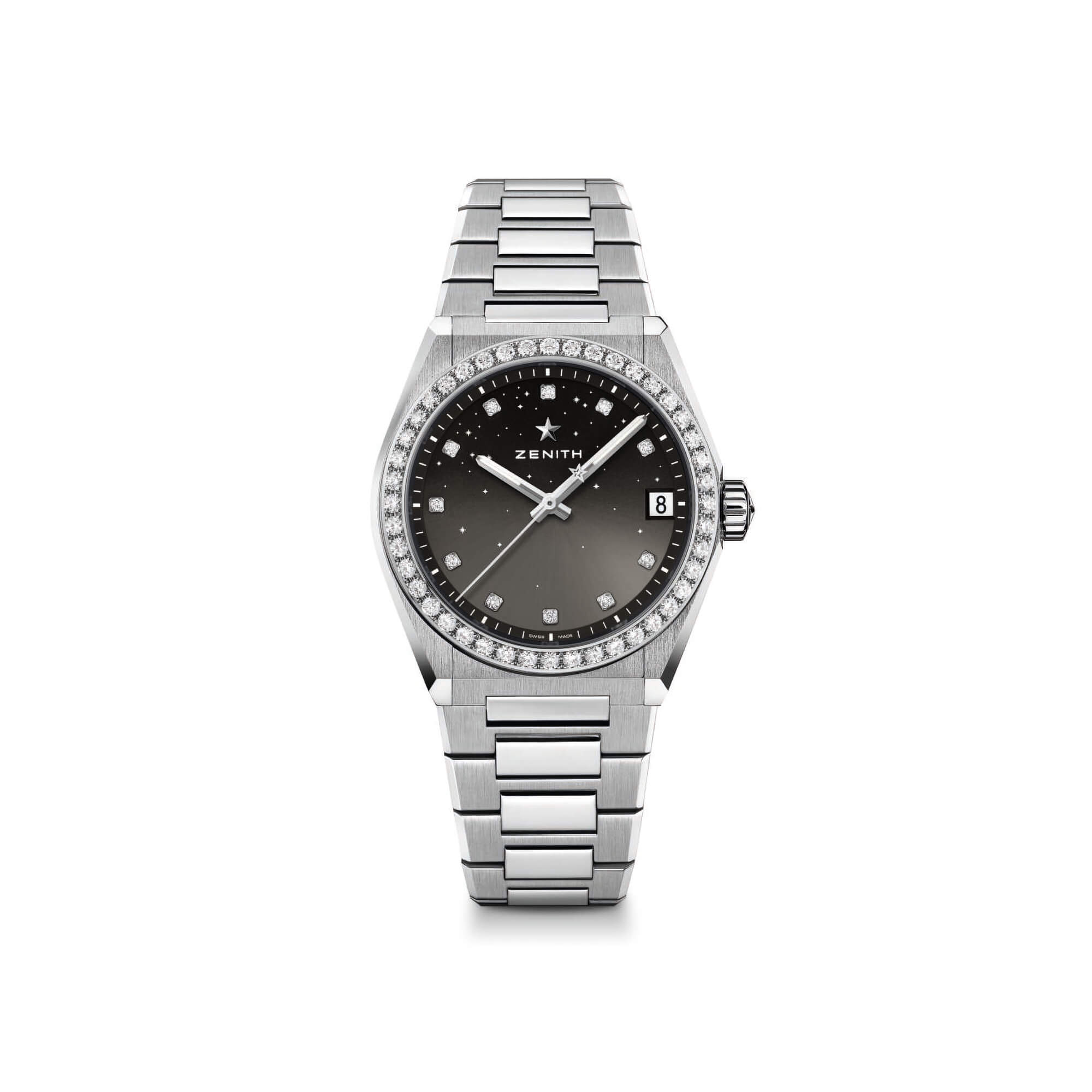 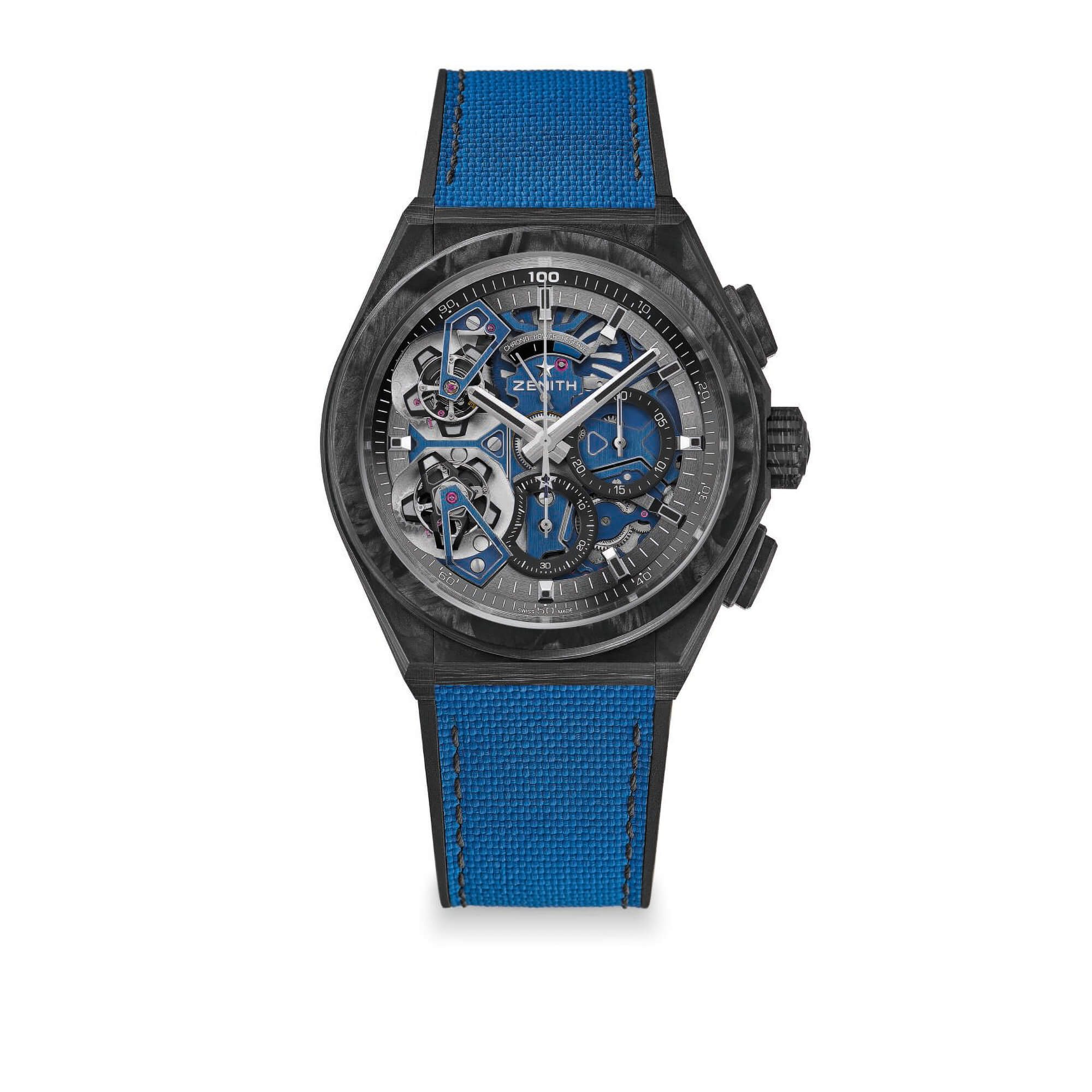